Twelve Years A Slave – “Channelled through Ejiofor’s defiant performance, Solomon looks at us…”

Why is Twelve Years a Slave relevant now? It may follow on the heels of slavery-themed Django Unchained and Lincoln but there is much more to Steve McQueen’s epic and accomplished film. This tale of slavery is bookended as Solomon Northup (Chiwetel Ejiofor) is a free man before and after, his twelve years in captivity. 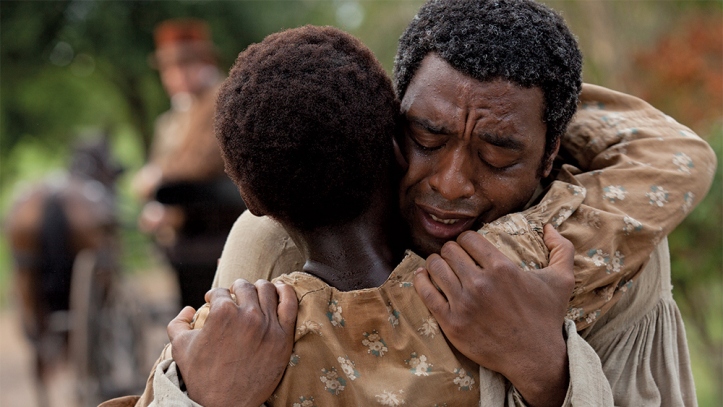 Lingering, prolonged shots force you to acknowledge the true horror of the period. This is how animalistic and selfish humans can be. Tip-toes in mud squeeze and squelch as they keep a hanging man alive. Sadistic plantation owners and carpenters abuse and show their true intentions as they fear the African-American who has risen above them in dignity and strength. Solomon refuses to be broken. He demands a woman cease her crying as she mourns the loss of her children. This strength is a lack of humility and as an audience we remain conflicted. “I survive!” he tells her when justified his lack of emotion towards his own loss of family.
Twelve Years a Slave is one of the most important films of the 21st Century, not least as it horrifically highlights the history of a society that too often prides itself on Christian values. Edwin Epps (Michael Fassbender) uses these values to control his slaves, reading scripture to support his exploitation. Epps himself, akin to Ralph Fiennes ‘Goeth’ in Schindler’s List, is a torn man. He lusts after, and is conflicted, about his feelings towards the innocent Patsey (a radiant Lupita Nyong’o). Using Christian values to control, dominate and hurt others is not unlike the use of Islamic text to terrorise others. In both cases, it is an abuse of doctrine to achieve a selfish, personal goal. McQueen demands your attention with poetic and poignant themes.

Why is Twelve Years a Slave relevant? Solomon struggles to write down his experience. He crudely cuts into a violin the names of his family – could he forget their names after years in captivity as “Platt”? One of the few sequences repeated is a moment, midway through his twelve years, whereby he tries to write down his experiences – and initially fails. Solomon, without realising, is one of the very few who can actually articulate his plight. The vast majority of slaves were illiterate – and, we are told, if they were literate they would be foolish to tell others. A fair comparison to slavery in the US is the holocaust – an atrocity that happened less than a century after the abolition of slavery. Records are unclear as to how many died in slavery. Seven million Jews died in concentration camps while the Atlantic slave trade is responsible for at least nine million deaths – but sources claim it could be as high as fifty-five million. At one point, as a free man, Solomon sees a slave who follows him in awe, but Solomon doesn’t act, content in his own safety. Told in flashback, Solomon doesn’t understand his inactivity. As Solomon needed to document his twelve years – McQueen needed to make this film. We need to watch it and we need to talk about it.

A review is an analysis of the film at hand, but this is the legacy of Twelve Years a Slave. This is a document to support and remind us of what humans are capable of – and what they can be content with. Why is Twelve Years a Slave relevant? Because it could happen again. Art can be reflection; art can be informative; art can be a reminder – or warning – to what is possible. Chitewol Ejiofor, in his final moments on screen, at one point looks out to camera. His gaze meanders, considerate and thoughtful; the camera doesn’t move. After viewing over two hours of cruelty, this moment is calming and his look travels through the lens. Channelled through Ejiofor’s defiant performance, Solomon looks at us. This is one written testament that could be adapted. How many stories exist that are not written? Voiceless victims that cannot be heard? Solomon is a voice that we can hear – but too many silent stories exist.

Published and written originally for TQS Magazine on 13th January 2014