It covers a greater space of time, tells a grander story and turns what was a family-centred, but nevertheless New York “Gangshter” story, into a personal drama set on an epic, ambitious scale.
Though the dialogue in The Godfather holds iconic and memorable lines, definitive scenes in The Godfather Part II show Michael Corleone’s true menace revealing itself. The Godfather portrays his sinister and deeply-calculated methods of management, but they are subtle and carefully-constructed. He recommends the hit on Solozzo and MacCluskey; he marries Kay (Diane Keaton) to maintain a strong family unit; he settles all family business in the climax of the film by killing off the leaders of the New York mobs – Barzini, Cuneo, Stratchi and Tattaglia (and Moe Greene in Vegas). But these murders occur at the very end of the first film. Part II shows how corrupted he has become – and how his lack of morality will stop at nothing to “protect the family business”. Subtlety is not the aim of the game – Michael Corleone wants to make a point. Tom Hagen (Robert Duvall) asks whether Michael wants to wipe everyone out – in The Godfather Part II it appears so. 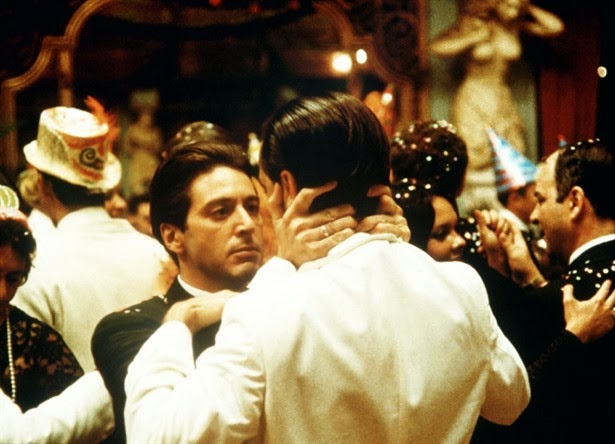 Alongside Michael’s ruthless pursuit of the American Dream, it is juxtaposed with his Father, Vito Andolini (changing his name to Vito ‘Corleone’ after his town of birth). Played by Robert DeNiro, we see a considerable difference between the man who began with nothing and Michael. Through a strong sense of family values and respect, Vito built an empire. He was willing to work his way through the system fairly – he works as an assistant; he raises a child; he joins a friend at weekly theatre shows that hark back to the old country. It is through the corruption within little Italy – and the lack of support offered by the authorities that Vito steps in. Fanucci (Gaston Moschin) extorts the local people and abuses their trust. Vito decides to stop this treatement. As a comparison to his son, who aims to control casinos in Vegas and set-up a new gambling hot-spot in Cuba, it is clear that something has been lost in between the generations.
Of course, Michael is not the only Son. Hot-head Sonny lost his life in Part I while Fredo (John Cazale) and adopted-Son Tom Hagen remain loyal to Michael. But family has been eroded – and continues to be eroded in Part II to great effect. The less family-focused conflicts are stumbling blocks. Hyman Roth (Lee Strasberg) and Johnny Ola (Dominic Chianese) in Cuba can be overtly political and less-engaging, while Senator Pat Geary’s (G.D. Spradlin) “love” for Italian-American’s is so forced it borders on parody. Even the Frank Pentageli (Michael V. Gazzo) plot bugs like a stone in the shoe as we can only imagine what it would’ve been like had Clemenza returned from Part I. 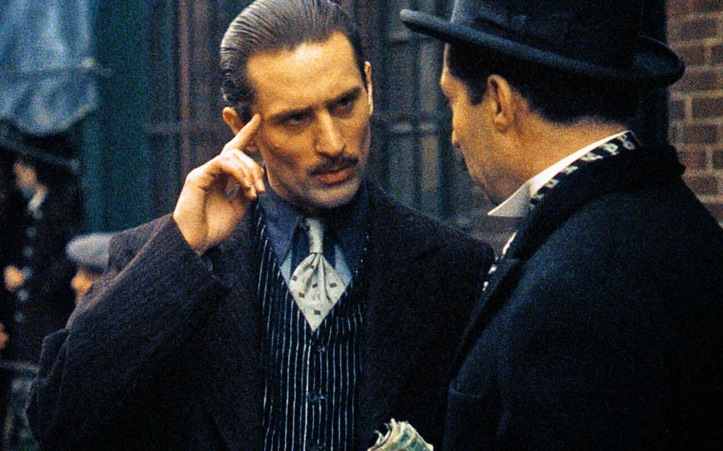 But these are pedantic points. The Godfather Part II still holds the most striking scenes in the series. The New Year’s Eve party as Pacino viciously grabs the head of the traitor – “I know it was you!” – is one such moment. Another as, what appears to be a small conversation between Kay and Michael, in the final act becomes one of the most explosive arguments he is involved within. Any scene with Fredo breaks your heart as John Cazale truly shows how strong an actor he is – and why Pacino, DeNiro and Meryl Streep often credit him with the strength of their acting. Finally, the entire story set within little Italy is an example of expert filmmaking. You can see that Sergio Leone can’t have looked too far when making Once Upon a Time in America, whereby the context and even lead actor in Robert DeNiro is reused.
The Godfather Part II has influenced many and remains a masterpiece to this day. Whether you believe The Godfatheris a superior film or not, one cannot deny the importance of The Godfather Part II – and how it manages to capture such an ambitious story so effortlessly well. Randy Meeks was stumped for a reason – The Godfather Part II is the one sequel that can comfortably take on its predecessor.
Originally written for Flickering Myth and published on 21st February 2014