Serpico – “A lone man on a mission to change a disease that’s hidden, deep in those who serve and protect…”

Al Pacino has been a target for many throughout his career. Serpico begins as full-bearded Frank Serpico (Pacino) is wheeled on a stretcher through bustling corridors, blood over his body, in the same manner as Carlito Brigante in Brian DePalma’s Carlito’s Way.

Clearly DePalma owes a debt to Sidney Lumet in this open tribute. It’s an ambiguous start as cop-killin’ ain’t cool on the streets of New York. But, unlike Brigante’s retiring gangster, Frank Serpico is a cop who’s joined the force with the intention to rid crime from the streets. His morals and idealism lands him in hot water with the New York Police Department as he refuses to join their corrupt, penny-pinching crew. Over time, he builds a ground-breaking court case, dubbed the Knapp Commission. Based on a true story, Serpico is written by Midnight Cowboy’s Waldo Salt and Norman Wexler and based on the biography of the same name, by Peter Maas. Highly critical of the police, Serpico criticises the unethical methods of controlling crime (through well-organised bribery) and the inevitable harassment within the workplace if you choose not to be a part of the underhand deals. But this is Al Pacino’s film. A clean-shaven cop taking the pledge represents a youthful naivety before Serpico realises the ugly side of policing. His facial-hair dictates his slow spiral into cynicism and distrust before he eventually has a full-grown beard – something we know from the outset is a sign of things to come. Pacino comfortably argues and bellows with friends and politicians; he flirts and playfully jokes with his girlfriends; and his gaze is intense as he fights his corner. Unlike The Panic in Needle Park, Frank Serpico is in complete control of his conduct – and knows what he wants. In one sequence, he scruffily drags a known mobster into a prison-cell. His frustration and anger at the lack of support is why it looks so messy – rather than his own lack of control. 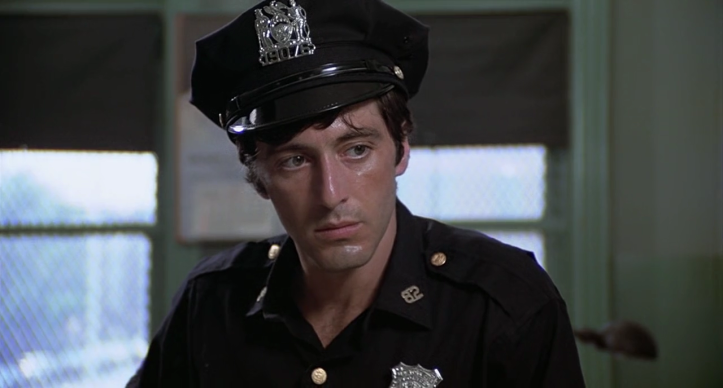 Sidney Lumet, as director, captures him by standing back. There is no voice-over narration or open-discussion about Frank’s feelings. We are observing the brutal truth. The grim streets and alleyways capture the confusion and brashness of the cops. The change in dynamic by turning the end of the story into the beginning is thought-provoking. Policemen state how “six other guys” wanted to shoot Serpico. Is he a villain? By the end, we realise those who are truly at fault. Serpico jumps to action on an attempted-rape call-out at one point, while his colleague scoffs at taking the call. Someone else will get it. But Serpico persists. When we see the vicious, decrepit state of the poor woman and the group surrounding her, expertly shot in low-lighting by Lumet, it only serves to support the change necessary within the organisation – a change Serpico leads. Not knowing the true story means we can speculate on the outcome. Michael Corleone, served his country but turned to become the leader of “the family”. We wonder whether Serpico will break. Like The Godfather, Pacino is strong and defiant. He will not back down to those his disrespects. But Serpico doesn’t have the muscle of the Corleone. He is a lone man on a mission to change a disease that is hidden and embedded deep in those who serve and protect. A little too long perhaps, Serpico is not a masterpiece. But it does showcase Pacino’s talents as he is in every scene. His likability is crucial as we see his frustration play out. We side with him and, in that final shot, we know the fight isn’t over. This post was originally written for Flickering Myth in February 2014