“It’s about creative procrastination” said, director of Under the Skin, Jonathan Glazer in 2002. While I doubt Michael Bay fails to acknowledge Fellini’s 8 ½ as inspiration (his 8 ½ film sitting somewhere between Transformers: Revenge of the Fallen and Dark of the Moon), when you flip open the pages of any film magazine the artists, from Woody Allen to Wes Anderson and Charlie Kaufman to Terry Gilliam, all owe a debt to Fellini’s masterpiece. In fact, the Best Picture of 2014, Alejandro Inarritu’s Birdman, would play exceptionally well against Fellini’s 8 ½.

Federico Fellini, shortly after directing the sensual La Dolce Vita, was stuck. Like Guido (Marcello Mastroianni), trapped in the car, Fellini could feel the pressure mounting. 8 ½ was his response. A cavalcade of actors, producers, intellects and, of course, women, dominate the attention of Fellini’s alter-ego, Guido. He can’t think straight and doesn’t know what he wants. An enormous set is built outside of town. His mistress Carla (Sandra Milo), a voluptuous married woman herself, arrives, only to be shooed into a small hotel. His wife, Luisa (Anouk Aimée ) also joins him. Guido, in his fancy hotel, is trying to rejuvenate his senses. Harking back to his childhood, he reminisces of his devout education and his parents. He dreams of a world whereby the women in his life accept his roving ways. Bathed in the class of 1960’s Italian style and peppered with a surrealist edge, this is a timeless classic. 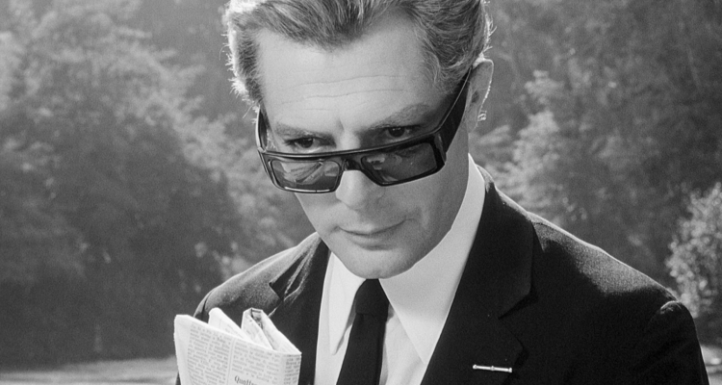 “I can’t go on like this. This is a madhouse” is a single line from the film. The conflict of the tight-control of a director against the unrestricted, flexible nature of an artist is effortlessly portrayed. And it is artists who appreciate the film, noting how there is nothing so dreamlike and sexy in cinema (in fact, last year Cannes 2014 used a shot on it’s program). But alongside the stylishness of the film, 8½ also made cinema more reflective of the auteur – and therefore the director himself. In the director’s poll of Sight and Sound in 2012, Fellini was the most voted-for director, establishing his canon as uniquely influential on filmmakers today. Mark Romanek, Atom Egoyen and Michael Apted all cited 8 ½ as one of their greatest films of all-time. Can we see Fellini’s influence on One Hour Photo – a film portraying a man relentlessly capturing photos and moments in other people’s lives? Can we see it in the 7up series whereby we watch an episode capturing ordinary lives every seven years? 8 ½ depicts a sense of self-analysis that turns the cinema into a window through to the filmmakers heart.

But let’s return to my initial comparison of Birdman. Beating Boyhood to the finish line at the Academy Awards earlier this year, it appears that both films are focused upon one creative individual who struggles to find an outlet after, it is assumed, they have passed their peak. Both balance a sense of surreal, otherworldly structure whereby we, as an audience, are constantly questioning what’s real and what’s not. Famously, the dismal Nine, courted the Oscars a few years back, believing it was the musical counterpart of Fellini’s masterpiece. But Birdman is a much more accurate relation. Thank God we don’t have to pick. We have both. And for a limited time, you can watch 8 ½ back on the cinema screen and see it the way it was intended. It’s cinematic and luxurious. Savour the experience on the silver screen as Fellini himself would have it no other way.

This post was originally published on Flickering Myth on May 1st, 2015