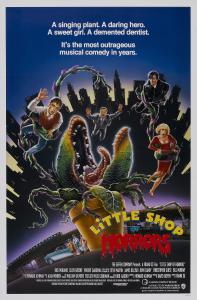 In an era whereby Avenue Q and Book of Mormon dominate the musicals on the West End, we mustn’t forget the imaginative and darkly joyous cult favourite Little Shop of Horrors. In fact, Little Shop of Horrors boasts the master duo of Alan Menken and Howard Ashman penning the lyric and music respectively. These are the force that pulled Disney from the dumps and to the heights of The Little Mermaid, Aladdin and Beauty and the Beast only a few years later. Little Shop of Horrors is a feast to devour, and you’d be foolish not to give it a taste.

Seymour (Rick Moranis) works, and lives, on Skidrow. He is madly in love with busty colleague Audrey (Ellen Greene) and despite the abuse he receives from flower-shop owner Mr Mushnik (Vincent Gardenia), he appreciates the roof provided. This is a self-proclaimed rock-horror musical akin to the wickedly delightful Rocky Horror Picture Show. Its B-Movie story is taken straight from a 1960, Roger Corman farce and manages to weave its memorable melodies (including favourites Skidrow (Downtown), Suddenly Seymour and Academy Award nominee Mean Green Mother from Outer Space) seamlessly into the monster-munching narrative. The animation of ‘the plant’, named Audrey II, is flawless as Levi Stubbs provides fast-talkin’ vocals that the puppeteers cleverly navigate. This director’s cut is a real wonder to watch at the cinema too, with a spectacular finale that reverses the original ‘happy’ ending with a special-effects savvy anti-ending with only the destruction of the world in sight – a treat that has only been available since 2012.

Watching Little Shop of Horrors also reveals cameos from the cream of the crop of American comedians in the 1980’s. Bill Murray, James Belushi, John Candy and Steve Martin all make exceptional, memorable appearances. Rick Moranis, a staple of the eighties within Ghostbusters and Honey I Shrunk the Kids, is rarely seen today and the little shop really does make you miss his wide-eyed helplessness that make his characters so much fun. 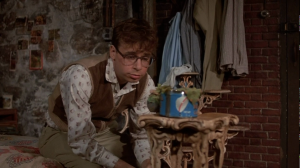 Little Shop of Horrors manages to make light of a broad range of incredibly dark subjects, whether it is the abusive boyfriend of Audrey, Seymours suicide attempt or the gross poverty of an inner-city. Audrey II represents much more than an entertaining, wise-cracking monster. Audrey II could be consumerism, and our own addiction to shopping and products. Could the plant be about vices? About our struggle to control our urges – no matter how destructive the consequences? In fact, Audrey’s song Somewhere That’s Green alludes to this dreamy sense of happiness. She wants Seymour and she wants to be happy – but the Better Homes magazine is what instructs and describes her happiness. She needs a shiny, chrome toaster and a Tupperware seller to know who she is – and to prove her pleasure. But Audrey is quite clearly played as a ditzy blonde, and surely not the peak of forward-thinking womanhood. Furthermore, the success of the off-Broadway show in 1982 connects the film to Nixon’s presidency, whereby bit-by-bit, the corporate American Dream convinced many – but left many more behind in the gutter (a literal gutter, opposed to ‘The Gutter’ club where Audrey met her boyfriend).

This is a wonderful success, managing to balance cheeky-songs, potentially-poignant subtext and a cast that defines the era it was made within. Little Shop of Horrors plays as part of the BFI’s ‘Cult’ strand that began in January. The experience of watching the ‘Directors Cut’ of Little Shop shows how unique these screenings are – and you can bet they’ll be many more in the coming year. Audrey II’s famous phrase “feed me!” only seems appropriate when treats like this are on the platter every month.