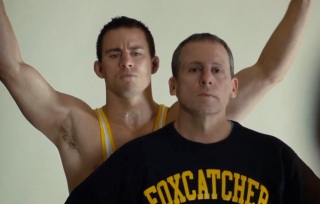 Foxcatcher (Dir.Bennett Miller/2015)
No music and little dialogue introduce brothers Mark (Tatum) and Dave (Ruffalo) Schultz. The dance of wrestlers, grabbing and holding each other in pin-downs and body-throws, prove their intimate knowledge of each other’s physicality. A combination of Bennett Miller’s considered direction and the actor’s commitment ensure that their relationship is deeply personal and wholly authentic. Foxcatcher is rooted in the world of wrestling, whereby the support of John Du Pont (Steve Carrell) gave security to athletes determined to be the best. But there is unease amongst the Foxcatcher ranch boys. Tension is clear between the hulking-Mark against family-man Dave. The isolation of the misty Pennsylvania-estate could be plucked from a 19th-century painting. Then ‘coach’ Du Pont arrives – holding a gun. He gazes down his nose and eyes his Olympians. Is it admiration or attraction? It’s uncomfortable – and Miller doesn’t let you off the hook for a second. Du Pont’s “training” as his mother looks on is disturbing, but revealing about this duplicitous man. Alluding to the Du Pont fox-catching family history, we wonder if ‘Eagle’ Du Pont is the mounted rider, belittling the “low-sport” foxes. Or is he the fox, as enormous sportsmen bullishly carry their masculine dominance around his property? A slow-build thriller, Foxcatcher is a stubborn film, whereby no narration or sharp-cut will take you out of the knowing glances and awkward acceptance of this questionable lucky-break. The disturbingly calm atmosphere may be an acquired taste but electrifying performances force you to appreciate the perfection of Foxcatcher.
Rating: 8/10