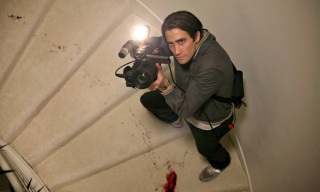 Based on the west coast streets, with the orange haze and branded bill-boards, Nightcrawler comes out of the dark with a sordid capitalist tale to tell. Starring a wide-eyed Jake Gyllenhaal as Lou Bloom, videographer of the LA boulevards, it’s a name he won’t let you forget. He captures the bloody crimes that dominate the morning television screens across the local area. Leeching off the ills of society, his role is needed because it makes money. His “professional” and guide-to-success etiquette may be creepy, but it makes money. Indeed, a parable about the flawed supply-and-demand system is about making money. Nightcrawler has the atmosphere of Michael Mann’s underrated Collateral, and the tech-savvy and internet-taught education of The Bling Ring. It also benefits from a stellar cast that hold Gyllenhaal’s focused mad man firmly on centre stage. Nina (Rene Russo), the pressured TV exec whose job depends on his material. She is strong, but his psychopathic and emotionless demeanour is stronger. Joe Loder (Bill Paxton) is an old pro, well-versed on the highways and byways, with his own ambitions to expand. His time has passed, and Bloom knows it. But the stand-out star is Riz Ahmed. Ahmed’s luckless chancer, Rick, desperately needs the ‘opportunities’ Bloom promises, but like many corporate promises, Bloom fails to honour them. Nightcrawler is a dark, pulsating drama, with a grimy underbelly that reveals the darkness behind our glossy western media. This is the American Dream without the humanity – and, like the morning news, it’s completely fascinating.
Rating: 8/10