Remaking an established, classic, staple of German expressionist cinema in 1979 must’ve been a tough sell. Werner Herzog’s Nosferatu the Vampyre, primarily a re-telling of F.W. Murnau’s silent masterpiece, is also a deeply eerie, unsettling and haunting film in its own right. Herzog is not averse to remakes, as he has proven recently with Bad Lieutenant: Port of Call New Orleans. Unlike Bad Lieutenant, Herzog chose Nosferatu so he could play with Murnau’s story and expand upon minor-moments in his own unique manner. Combining elements from Browning’s Dracula and the original novel by Bram Stoker meant that Herzog could develop his work to potentially become the definitive story of the Count.

The standard story sets the film up. Jonathan Harker (Bruno Ganz) is an estate agent, sent by his boss Renfield (Roland Topor), to visit Count Dracula (Klaus Kinski) in Transylvania. Dracula is due to buy a house in Bremen and Harker needs to ensure he signs the deeds. Harker is hesitant at first as he does not want to leave his wife (intensely played by Isabelle Adjani) but decides to go anyway so that he can buy her a house. Arriving in Transylvania, he is warned of the demons that lurk in the castle but dismisses them as he doesn’t believe in such supernatural occurrences. Harker meets Dracula, a bald rat of a man with long white fangs for his front two teeth. In a moment of terror, Hawker cuts himself and Dracula, to help, sucks the blood. Harker’s locket falls free and Dracula is transfixed by the beauty of Harker’s wife, Lucy. The Count has claws and, as Harker sleeps, Dracula sucks his blood and soon after leaves Transylvania locking Harker in his castle so Dracula can have Lucy for himself.

As Dracula makes his way to Bremen, we begin to see the first of the white rats that will plague the city. Within simple, but sinister coffins full of soil of Transylvania, these rats will unleash a new misery on the town. On the ship itself, one-by-one, all human life ceases to exist and only Dracula arrives on the ship in Bremen. Harker does manage to break free from the castle and travels by horse through the vast landscapes. With decreasing energy and slowly moving closer to death, he returns to Bremen a gravely ill, shell of a man.

The lead performances by Ganz, Kinski and Adjani are complex. Rather than merely a heroic man, to save the day, Harker is conflicted and his decaying body brings with it darker demons that spoil his mind. Lucy, alternatively, will not give her love to Dracula – but she is willing to give her life. Dracula despises life and, though pained when faced with death, believes death is an escape from his morbid existence. Herzog holds steady a sinister pace with a deeply unsettling cold atmosphere. Shots linger for longer than they need to and the slow arm reaching across the room – a direct reference to Murnau’s masterpiece – continues for an awful amount of time. Will he reach out to get us in the audience? The expansion on the use of coffins and the plague is grotesque. In one sequence white rats infest the square and friends gather round a table celebrating their imminent death. One cut, and the family are gone as the rats eat the leftover food. There is no sharp, shock moment; there is no gore; there is just the knowledge of their dreadful deaths. 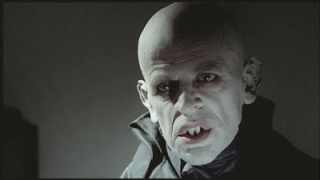 The vast landscapes, akin to Aguirre, Wrath of God, on widescreen is breath-taking. Horses chop across the muddy roads and a juxtaposition between the beauty in nature of Transylvania is against the horror that happens behind the closed doors of the castle. The story of infestation, blood-sucking and lust is timeless. Herzog’s interpretation is littered with meaning and subtext, purposefully challenging us as viewers to correlate the gothic themes to our own society. Though slow-paced and using a controlled, pastel-palette of colours, Herzog’s Nosferatu is surely the way adaptations should go. Respectfully self-aware and reverential to the original, Nosferatu is. But it also remains relevant and develops the story so that it holds its own, whether you have seen Murnau’s or not.