Gone with the Winddemands the cinema experience. Now, we argue about films like Gravity and Avatar. But the argument still stands for films including 2001: A Space Odyssey and – with a re-release at the BFI and nationwide – Gone with the Wind. The very definition of Hollywood Epic, Gone with the Wind is one of the most successful films of all-time. Partly due to its longevity, Gone with the Wind, when ticket prices are adjusted for inflation, remains the top of the box-office – followed by Star Wars, The Sound of Music and E.T. Modern viewers, when faced with a four-hour, sprawling civil-war romance, will cringe at the thought. But it must be seen to be believed – Gone with the Wind lives up to its reputation.

Set prior to the American Civil War, we are introduced to spoiled Southerner Scarlett O’Hara (Vivien Leigh) as she ponders which of two twin brothers she will dance with. Her father’s plantation, Tara, is her home and she is besotted with Ashley Wilkes (Leslie Howard) from the ‘Twelve Oaks’ plantation close-by. Unfortunately for Scarlett, Ashley is due to wed his cousin Melanie Hamilton (Olivia de Havilland). Enter Rhett Butler (Clark Gable), a cocky and confident sniper; a friend from Charleston to the Wilkes. His self-serving attitude seems to be the perfect match for Scarlett, but she is not impressed. She seeks Ashley, a man who wants a gentle lady – opposed to the brash, forward and demanding attitude Scarlett has. The civil war takes the men to war – a war Rhett believes is foolhardy for the Southerners – and Scarlett impulsively marries. He dies in the war and this becomes only the beginning of Scarlett’s constant struggle with love. Patiently, Rhett waits in the wings for her to become a woman with a heart – and we wonder whether a destroyed family home, the death of thousands following the war or Rhett’s immoveable presence will change her. 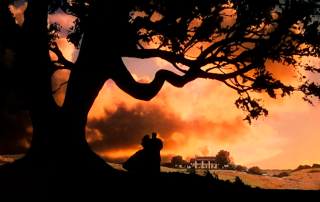 The time-period is fraught with tension as slaves are common-place, and in Gone with the Wind, they only seem awkwardly happy to help. While likeable characters use terms like “darkie” and “white-trash”, there is clearly a contextual issue we need to consider. Written in 1936, Margaret Mitchell’s novel portrays the upper-class white lifestyle in the South, as seen by the upper-class in the South. Though strange to watch, the lack of an honest perspective from others may be the only true concern – I doubt the slaves were as content in their ‘ownership’ as depicted in the Tara homestead. By the same token, the aggressive and expected sexist attitudes need to be put in context. Rhett’s unforgettable expectations of Scarlett as he carries her into the shadows of sex are deeply unsettling: “This is one night you’re not turning me out.” he demands. But again, his treatment of her paints darker tones to the story, creating a fascinating conflict between two lead characters that shows how self-serving they are.

Vivien Leigh is flawless in the role and this re-release kicks off a BFI season on Vivien Leigh. Considering the search for Scarlett O’Hara is infamous unto itself, the casting of Leigh and the character she creates could not be more perfect – watch her brief acceptance of her Academy Award to see how different she is in reality. Clark Gable, a fan’s favourite, seems to plays it smug and satisfied which works for the role while Olivia deHavilland holds such sincerity that she is a perfect counterpoint to Leigh’s dastardly ways. Leslie Howard feels underserved, but he truly creates a character besieged by his lust for Scarlett against his upper-class ideals of love with Mellie. Maybe Ashley and Mellie are “right” for each other but he never truly rejects Scarlett.

The first act is clearly the strongest and includes iconic moments including Scarlett walking through thousands of injured and dead soldiers as they are slowly revealed through a steady camera moving higher into the sky. These shots alongside the vivid, burning oranges and red that light up the sky as characters stand in silhouette are almost exclusively attributed to Gone with the Wind. This new 4k restoration of the original 70mm print that, though square, is larger than the cropped widescreen version is simply mesmerising. Combine the awesome scale of the shots and incredible detail with Max Steiner’s unforgettable score, therein are the two additional elements that ensure Gone with the Wind remains a classic.

This is the time to see Gone with the Wind. Spielberg’s Lincoln last year set within the same time-period, both noting the importance of Gettysberg and the outcome of the civil war, would make an epic double-bill. Though the length of time it would take would surely remain a challenge. Returning to cinemas, Gone with the Wind has pace and scale, and an ideal way into the Golden Age of Hollywood. It deserves its praise and accolade. Recently, critics and audiences aggressively argue to others how important it is to watch Gravity at the cinema; Gone with the Windis equally important to view in the cinema – and this is the moment to watch it.

Again, I wrote a brief analysis on Gone with the Wind in 2010…