A character that is as well-realised as Dom Hemingway deserves a better send off. Richard Shepard writes and directs this Brit-Gangster film that lets loose a persona that demands your attention from the moment he appears. What a shame it doesn’t satisfy your appetite by the closing credits.

After keeping quiet for 12 years, Dom Hemingway (Jude Law) is released from prison. With best friend Dickie (Richard E. Grant) he travels to France to receive his ‘present’ from big-boss Mr Fontaine (Demian Bechir channeling a Robert DeNiro style of class). After a riotous party, it ends in tears as Dom speeds off the road and Fontaine’s sultry wife Paolina (Madalina Ghenea) makes off with Hemingway’s bag of cash. Rather than a revenge-story, Hemingway is forced to figure out what to do next. What will he do about his daughter who doesn’t want to see him anymore? What will he do about his professional safe-cracking career now everything is digital? Everything is up in the air for Dom Hemingway.

At one point, Jude Law’s ‘Dom’ and faithful pal Dickie (Richard E. Grant) sit on the Eurostar. Hemingway is hung-over, moaning and groaning about his pain. Hemingway tells us a “dog shat on my soul”, as Richard E. Grant, uninterested and apathetic, is un-phased. He has seen it all before. In Withnail & I, Grant’s ‘Withnail’ verbalises the hangover-from-hell to Paul McGann as they speed to Monty’s: “I feel like a pig shat in my head!” he says.

Clearly, Richard Shepard has created a character that has the poetic anger of Withnail, the cockney-tone of Delboy and the facial hair of an X-Man in Dom Hemingway. Jude Law has never had so much fun, and Richard E. Grant exploits being the straight man to Hemingway’s drunken, forthright anti-hero. The “cock” monologue (hinting at an undercurrent of pseudo, masculine-pride) that opens the film seems to carry a confidence that starts the film off with a bang – but unfortunately it limps to deliver a final act.

Masculinity in the modern-age is a tricky affair too as the animalistic, aggressive man does not suit the accepting, culturally-aware father. Indeed, there’s a sense of old-traditions clashing with modern society as Dom is 12-years out-the-loop. Dickie seems to be stuck in the 1970’s as he wears vintage sunglasses and floral shirts. “I’m too fucking old and I didn’t bring the right shoes” is the response when things go ape in the forest and Dom Hemingway decides to strut across Fontaine’s property naked. 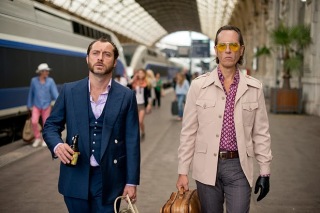 Unfortunately, despite a strong set-up as we are brought into the criminal world of Hemingway and Co, the heart of the story gets short shrift. Dom Hemingway’s attempt at building bridges with his daughter Evelyn (Game of Thrones’ Emilia Clarke) feels like a missed opportunity that could’ve been expanded upon. There is very little time for us to see these relationships develop and blossom and it is difficult to get a sense of history between all the characters. Instead, we are introduced to further London gangsters, complicating matters further. By the final moments, Dom Hemingway feels lost in the abyss – with no definitive sense of resolution. Jude Law will gain great respect for the role and the promising start gives the indication that Shepard surely should return to London for another Brit-based film. But it loses its way after Dom returns to London and rather than trying to amp up the action with a dramatic I’ll-cut-off-your-cock moment, the direction should’ve involved the family – or even the Mafia family from France that disappears after the car-crash. Dom Hemingway will charm you, but he won’t satisfy you.

This review was originally written for Flickering Myth