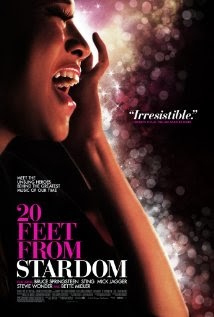 Hearing Gimme Shelter by The Rolling Stones is nothing earth-shattering. Martin Scorsese alone has embedded the songs so deeply into our collective, cinematic consciousness that even if Mick Jagger isn’t your cup of tea, you’ll know the song. Listening to Gimme Shelter in Twenty Feet from Stardom, on the other hand, brings a tear to your eye – if not, it’ll have you weeping into buckets at the sheer talent and force of the vocals. And not Mick Jagger’s vocal either.

The vocals are by Merry Clayton. Her agent, waking her in the evening, calls her to the studio, telling her “The Rolling … something … need you”. Mick Jagger recalls the moment too – warmly describing how Merry was in her silk pyjamas when recording the vocals. Another backing vocalist Darlene Love recalls her hiring under Phil Spector whereby she recorded, what was to become her first solo record, He’s a Rebel – only to hear the full version she sang on the radio and credited to The Crystals. The same Crystals who herself, alongside her group The Blossoms, provided backing vocals for previously for hits including Da Doo Ron Ron and Then He Kissed Me. They also provided the backing vocals for Frank Sinatra, Elvis and The Supremes. The list goes on and on.

Morgan Neville directs this fascinating documentary (the first to document the history of backing vocalists) focusing primarily on singers from different generations from the 1960’s through to modern backing vocalists who continue to support The Rolling Stones, Bruce Springsteen, Sting and Stevie Wonder to this day – and these artists, amongst others, all feature in Twenty Feet from Stardom, singing the praises of these outstanding performers.

What could be a historical by-the-numbers documentary or a pure self-indulgent sales-publicity for the artists albums, Twenty Feet from Stardom is neither as Neville balances deftly the need to praise, celebrate and clearly define the importance of these artists in popular music. He captures moments of pure beauty as Lisa Fischer sings fluidly and naturally, without lyrics, surpassing every voice that even approaches the American Idol stage in her flexible, wide range combined with complete control and awesome prowess as a powerful woman. Indeed, these are not weak women (and men – in Oren Waters, a member of The Waters family who have supported Paul Simon and Michael Jackson amongst many others) who are subservient to the leading male performers. They carry an air of grace and a humility that has not been tainted by fame and fortune – they carry with them dignity and a pride in their profession.

Twenty Feet from Stardom doesn’t shy away from highlighting the singers attempt at becoming the leading stars themselves – but it seems, like many success-stories, making that stretch to the front of the stage is a gamble unto itself. Judith Hill, supporting Stevie Wonder, remains in awe of performing with the Motown legend and the gamble of giving this up for a shot at the big time is a risk. It is clear as Springsteen, Wonder, Jagger and Sting (who all talk about a sense of “ego” you must have to become a lead-singer) are in absolutely awe of these singers and give them the utmost respect.

Listening to The Rolling Stones again, after the guitar solo 2-minutes in, listen to how Clayton peaks at the high notes during the legendary lines of Gimme Shelter – notice her voice cracks. It cracks as she gives this one, single line – and she is giving everything she has got. It is breath-taking and a moment that many may never have noticed before now – and after hearing the vocals alone in Twenty Feet from Stardom, we shall never forget in the future. To hear, and see, the women who created such a glorious sound is a privilege unto itself and highlights how true singers still do exist in pop music – they simply appear behind those who are front and centre.