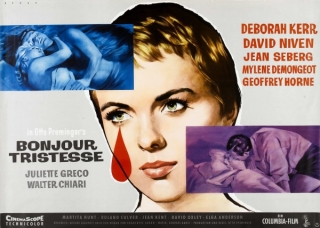 Breathless and From Here to Eternity couldn’t be further apart. While one is an iconic feature of the trendy French New Wave, the other is an Oscar-winning “American” classic, steeped in US tradition starring – amongst others – Frank Sinatra. Bonjour Tristesse, starring Jean Seberg and Deborah Kerr (from each film respectively), almost pits these two conflicting attitudes against each other. The two characters are connected by playboy Raymond (David Niven) – he and his daughter, trendy Cécile (Seberg), lived a carefree life whereby both could “breathe in” the air each morning and romance who they please. This was until strict fashion-designer Anna (Kerr) arrives and Raymond deeply falls for her changing the lifestyle Cécile enjoyed so much. Told in flashback, we know that Cécile and Raymond are not as close in the future and Anna is nowhere to be seen – but crucially, Cécile is cold-hearted and loses her romantic and playful energy, but we don’t find out why until the final moments connects the dots.

Directed by Otto Preminger, Bonjour Tristesse is based on a novel by Françoise Sagan, and manages to constantly frame and reinforce the differing relationships between the characters. The structure of the film automatically demands comparison between the natural and relaxed atmosphere of St. Tropez, filmed in glorious colour (something the re-mastered version only enhances), while the bookends of the story are cool, black and white, in Paris. Busy Parisian parties and restaurants combined with large cars and stylish dresses – opposed to the French Riviera whereby loose shirts and swimming in the sea is the order of the day. Characters seem to contrast as Cécile and Anna represent the tradition and change; old and new – Cécile, with the cropped hair that would only lead to countless imitators in the sixties; Anna, expecting Cécile to study and proud of the” safety” of marriage. Raymond and Cécile don’t see a value in education – while Anna does. Cécile and Philippe (Geoffrey Horne) find each other secretly and marriage – to Cécile – is a ridiculous prospect (though not to Philippe). These dynamics continue throughout, assembling ideas about class and gender; relationships and attitudes. Considering Anna and Raymond’s relationship hinge on their engagement – the dismissive and pessimistic attitude towards marriage from Raymond’s ex-girlfriend Elsa (Mylène Demongeot) balances out these traditional ideas of love with more liberal notions. 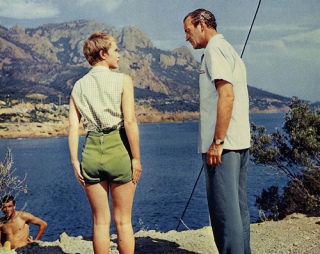 It is truly tragic that Bonjour Tristesse, translated as “Hello, Sadness”, gained only mediocre attention at the time of its release in 1958 – two years before Godard’s À bout de soufflé turned Jean Seberg into an icon of the 1960’s. Indeed, though Preminger was a demanding director – often reducing Seberg to tears – the characterisation of Cécile is fascinating. She is conniving and plots to ruin her Father’s relationship – but her voice-over is so clear, it sounds as if she doesn’t realise how heartless she is becoming. Playing a 17-year old, the bottom-line is her maturity – and the innate lack of awareness of a teenager simply overpowers what is right and wrong. Then again, her “plot” could be considered a test for Raymond to prove his love to Anna; a test he (very easily) fails. In any case, again, we are wrapped into the fascinating characters of the film again and the differing philosophies of each character. Quentin Tarantino once explained how Jackie Brown was all about characters – and characters you simply wanted to spend time with. Bonjour Tristesse manages to capture this effortlessly, as spending time on the Riviera with Jean Seberg, David Niven and Deborah Kerr is my idea of a good time – and something I will revisit again.