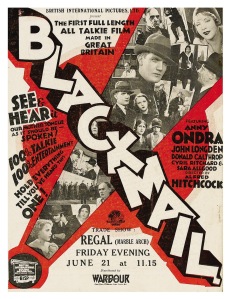 Alfred Hitchcock, prior to his acclaimed Hollywood masterpieces such as Vertigo, Psycho and Strangers on a Train, had his roots within the German and British cinema system. This month the BFI are celebrating his silent films in the aptly titled ‘Hitchcock Silents’ season. Blackmail, particularly, is a milestone in British cinema as it is considered one of the first “all-talkie” films – and yet I viewed the film as a silent. Indeed, Hitchcock created two versions; one loud-and-proud “all-talkie” version and another (for those cinemas not fully-fitted for sound) silent version. The latter is more difficult to get hold of – and even if you manage to track down the German DVD that includes both versions, you’d find it tricky to hunt down live piano accompaniment to perform alongside. Thankfully, this experience is what the BFI is providing and considering the silent version has different scenes and actors (as they were shot separately), this screening is a rare treat and something to take advantage of when it screens on Southbank.

Blackmail sets-up the usual Hitchcock three-way relationship involving uncomfortable murderers, alongside drawn-out suspense and a grand finale at the British Museum. Flirty girlfriend of police investigator Frank (John Longden), Alice (Anny Ondra), naively entertains a sleazy Artist (Cyril Ritchard). Arriving at his flat, after some creepy and sinister advances, she becomes the victim of an attempted rape. She murders the artist and wanders London as news of the murder spreads – and Frank realises (through a forgotten glove) that Alice is the murderer. He confronts her and, as they discuss the situation, a third man joins the conversation – “Tracy” (Donald Calthrop) – and he also knows who killed the artist and blackmailing the couple.

At only 75-minutes long, this is a short film that manages to cram in an exhilarating story. The dark themes that dominate the first act is a moment that the film harks back to time and time again. Within the artists flat resides a painting of a laughing jester; an image that haunts Alice throughout. And though the murder takes place behind a curtain, the limp hand that falls to signify his death also becomes a reminder to Alice as she walks London and notices arms resting out of car windows and on a ledge. These recurring moments hint at the same type of repetition we see later in Hitch’s career, such as the latch key in Dial M for Murder, or the use of circles in Vertigo.

A stand out film in Hitchcock’s career, the sharp hats in silhouette show how mature Hitchcock already was in 1929. Blackmail is thoroughly enjoyable and sets the scene for the future of his films through narratives and plot-developments we have seen many times. A final chase in the British Museum seems to echo North by Northwest as characters run amongst enormous pharaoh heads leading to a climax as – akin to Saboteur, Vertigo and The Man Who Knew Too Much – Tracy falls from the top of the building, through the glass to a grisly end. But Hitch knows how to end a story and, despite a dated joke as everyone laughs at the idea of a “Lady Detective” (who would think!), a carefully controlled approach and close-up on Alice gives the impression that maybe there is more to her than meets the eye. By releasing alternate sound and silent versions to suit different audiences, Hitchcock ensured he was at the forefront of cinema. Like the continuous-shot-film Rope and 3D Dial M for Murder, In 1929, I’d like to think that many people knew that Alfred Hitchcock himself had much more to offer after watching Blackmail …