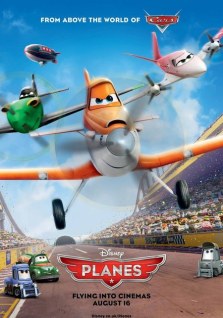 “See ya, suckers!”
Introduction
Considering the obvious race-after-race structure of Cars 2 was what many considered – for want of a better word – mechanical, it is surprising that Planes seems to follow the same structure. What was originally intended to be a straight-to-video Disney spin-off, the successful racing sequences inspired John Lasseter – director of Cars and Chief Creative Officer of Disney and Pixar – to release the film cinematically. The lack of a Pixar logo will put fans off, but this film is very much in the mould of Cars 2, with a sprinkling of Cars on the top, creating a film that feels repetitive and lacking heart.
Repeating Radiator Springs
Dusty (Dane Cook) is a crop-dusting plane who is desperate to race in the big leagues – this means an opening act whereby Dusty trains and befriends old-timer Skipper Riley (Stacy Keach) and enters into a qualifying race. Does he fly-high? Of course he does – and we see his significantly smaller plane challenge the big guys as they compete in an across-the-world tour moving from crossing the Atlantic Ocean, the Himalayas and the Pacific. To make matters worse, Dusty is afraid of heights and therefore plans to fly low for the vast majority of the races – and yet, continues to win each time. 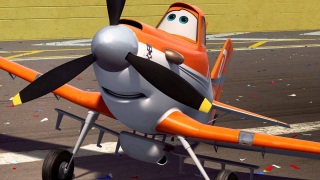 In the same manner that Lightning McQueen in Cars and Cars 2 had a group of friends to help him through, Dusty has a very similar combination of friends – Dottie (Teri Hatcher) plays the female friend while Chud (Brad Garrett) is “the clumsy one”, just like Mater. Cars held high ambitions and lofty aspirations as it challenged the audience to consider the small-towns that are squeezed off the road by the bigger companies. A story that, in some respects, contradicted what we all believe Disney to be. Ironically, it seems that the personal – but political – story of Cars has been squeezed off the road for toy-focussed, repetitious narrative story-telling. Cars 2, though a financial success, was critically panned but Planes has clearly ignored the criticism and continued full-steam ahead to create a franchise that is clearly about little plastic vehicles and different countries. 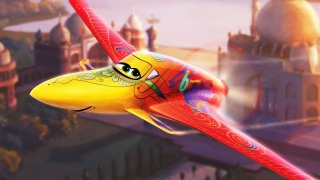 Re-Play
In Planes we now have an English plane in ‘Bulldog’ (John Cleese) and an Indian plane in ‘Ishani’ (Priyanka Chopra). Maybe Disney realised they had missed a central area of the Asian market and capitalised on it this time with both a core character (Pan-Asia plane ‘Ishani’) and a romantic sequence that is a celebration of the stunning landscape India has to offer as they glide over the Taj Mahal. No surprise that Priyanka Chopra is a huge star in Bollywood becoming one of the highest paid-actresses after notable performances in films including Andaaz, Aitraaz and Fashion. 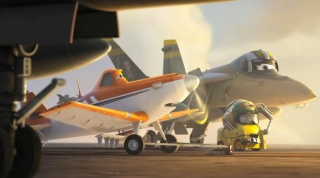 Funnily enough, in the 1980’s and 1990’s, TV-series Jimbo and the Jet Set and Budgie the Little Helicopter anthropomorphised planes and automobiles and, though I recalled the Milkyway advert when watching Cars, these TV series didn’t come to mind. This time, they did because it appears that big eyes stuck onto the windows of vehicles are ultimately nothing new. Planes and Cars have become a franchise that children clearly flock towards because they have the immortal enjoyment of characters that can be recreated at home on the floor (as they did in the 1980’s and 1990’s) – to some extent, this was the same reason Toy Story was a success as it tapped into the nostalgia when adults were young. Unlike Toy Story, the heart of the characters is missing in Planes. As children can create their own versions of Dusty and Dottie, whizzing them across the carpet, it’s worth reminding ourselves that with Toy Story – and any successful children’s film – they would also imitate the characters voices and try to act out the characters they knew. Dusty and Dottie are just boy and girl planes and cars. They have nothing else that is engaging and, unfortunately, nor does the story itself … but we’ll see them again, that’s for sure.
This was originally written for Flickering Myth on August 15th 2013