“The earth I pass will see me and tremble. But whoever follows me and the river, will win untold riches. But whoever deserts…”

Werner Herzog in 2013 is something very different to Werner Herzog in 1972. Herzog in 2013 is the villain in Jack Reacher; director of surrealist-remake Bad Lieutenant; director of Grizzly Man. His unique, accented voice-over making him a figure of ridicule whilst a memoirs book by film critic Mark Kermode recounts a story whereby Herzog was shot during an interview and casually laughed it off – as Kermode feared for his life. In the early 1970’s, Herzog was amongst the very-best of the New German Cinema movement, alongside Wim Wenders and Rainer Werner Fassbinder. But unlike Fassbinder and Wenders, Herzog created cinema that was “set neither in Germany, nor in the present, nor did it explore the emergent themes of gender politics or national identity” (The Story of Film, Mark Cousins). Herzog, and his contemporaries, were crucial in reviving German filmmaking for the first time artistically since the 1920s. Aguirre, Wrath of God is merely one example of these ground-breaking films … 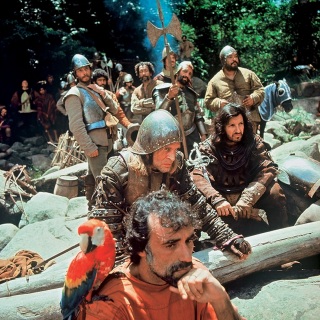 Spanish conquistadors, in 1560, try to find El Dorado. Led by Gonzalo Pizarro (Alejandro Repullés), we see  hundreds of men (and what appears to be two women), clad in half-armour and carrying canons, across dense forest and within deep valleys. The epic-scale of the lush landscapes and rocky cliff-faces is breathtaking – something complemented in this re-release by the BFI. The difficulty in travelling through the landscape takes its toll and Pizarro decides to send a smaller group ahead on rafts – in the hope of finding El Dorado “for God” (for Gold…). But Pizarro also decides to place the disliked Aguirre (Klaus Kinski) as second-in-command of the expedition despite the advice of others.

The film continues as Aguirre dominates the group and slowly, but surely, they seem to get lost further into the wilderness. The strange dynamic between the conquistadors and their Indian slaves is unsettling and the arrows that seem to kill those on the raft appear from nowhere – almost as if the surrounding forest is attacking the uninvited guests.

The core of the story is the madness that envelopes Aguirre and destroys those on the expedition. The acclaim Aguirre, Wrath of God received was partly through this metaphorical talking point that emerged, but less than five-years later, it became a crucial visual and thematic reference point for Francis Ford Coppola and his outstanding Apocalypse Now.

Famously, on set, Klaus Kinski and Werner Herzog argued to a point whereby Herzog pulled a gun on Kinski to force him to finish the film. Mark Cousins considers this an example of how the “physical feat and dangers of the production process became absorbed into the emotions that appeared on screen”. In that regard, Aguirre, Wrath of God is an example of capturing the madness within the story – and within the primitive environment they were exposed to. Considering Herzog and Kinski continued to work together in the future – notably in Fitzcarraldo – it is an integral moment in both careers that is captured on screen.

Geoff Andrew confidently describes Aguirre, Wrath of God as a “masterpiece … [combining] a flair for the epic with moments of incisive miniaturist observation”. His overwhelming praise for the film is difficult to decifer as a viewer in 2013 – and after Apocalypse Now, there is a preference between the two whereby the latter will surely overshadow the former. But it is worth reminding ourselves of the multiple further influences Aguirre, Wrath of God has had on others including Predator and The Blair Witch Project. In fact, any film that features the madness of man in the jungle or wilderness will owe a debt to Aguirre, Wrath of God. Then again, harking back to “Herzog 2013”, his documentaries have often focused their attention on the same themes – Grizzly Man is Timothy Treadwell becoming so obsessed with nature that it becomes the death of him; Into the Abyss tackles prisoners on Death Row and such an animalistic world-view clearly runs parrallel to the jungle, as humans are bound to change in such a strange, contained environment. My own assumption that Herzog has changed dramatically may not be true at all – because the fight between man and nature – and the madness created by nature – continues to be shown in his latest films, indeed, throughout his entire career.