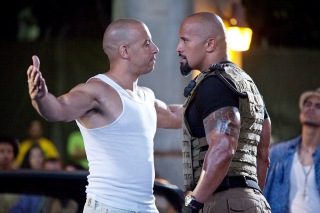 Fast Five (Dir. Justin Lin, 2011)
We’re taken to the streets of Rio in Fast Five, whereby Dom (Vin Diesel), Brian (Paul Walker) and Mia (Jordana Brewster) bring together characters from every previous film to take down Mob-boss Reyes (Joaquim de Almeida). Again, Justin Lin directs an action-packed, rough-ride with the added bonus of Dwayne Johnson playing the FBI agent extraordinaire ‘Hobbs’, intent on catching the fugitives. Bullish-cars, gun-fights and bald-men-fighting deliver on their promise of testosterone-fuelled entertainment and returning cast members give a sense of camaraderie that has lacked previously. Fast Five knows what we like, and Lin has created a film-formula that absolutely works.