“You need to know how to squeeze the tits of the system.”

Following from last weeks The Long Good Friday, we continue a streak in British 80’s drama with My Beautiful Laundrette. Unlike The Long Good Friday, in Stephen Frears controversial film we are now firmly embedded into the Thatcherite era. The Iron Lady has been in power for over 5-years and, dealing with issues as polemic as racism, sexuality and immigration, it begs the question as to the type of commentary the film has on the time-period. Hanif Kureishi, son of a Pakistani Father, but born-and-raised in South London, clearly has a first-hand perspective on many of the issues within the film, but you would be hard pressed to  pin down the political issues being raised. The film was nominated for an Academy Award for Best screenplay, but lost out to Woody Allen’s Hannah and Her Sisters. It is most notable for its appearance of Daniel Day-Lewis in an early role, but clearly establishing how demanding and dominating his screen-prescence is – even when he was starting out. 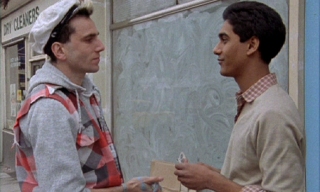 Omar (Gordan Warnecke) is taken under his Uncle Nasser’s (Saaid Jaffrey) wing to run a beaten-up Laundrette – and, within a Pakistani community, he is subjected to racist intimidation by the local neofascist gangs while within his own community he is expected to move up and become a successful businessman. IN addition to this he (it is implied) resumes his relationship with Anglo-Saxon Johnny (Daniel Day-Lewis), who assists him in establishing the Laundrette business.

We watch with baited breath as to whether the couple will be “found out”. Though a tense element – highlighted in a moment of interrupted love-making as Omar’s Uncle dances with his mistress in the Laundrette prior to its grand opening – it is clear that this is not a film about the acceptability or unacceptability of homosexuality. It appears to highlight the changes in attitude to class, and social-change, rather than an attempt at changing attitudes towards sexuality. Uncle Nasser, though succesful in his transition to London-life, he loses touch with his cultural roots – leading to a fractured relationship with his daughter and a sham-marriage. Indeed, Omar himself becomes increasingly money-obsessed as the film progresses – leading to a shocking confrontation with Johnny. The film purposefully begins as Daniel Day Lewis’s Johnny squats in flats – before we change to see the difficult family-life Omar copes with as his Father is an alcoholic and so, consequently, his Uncle takes him away to work in his car dealership – in turn, leading to the laundrette. How many have become increasingly successful through a political-power that valued building privatised buisness over destroying the poverty that plagued the streets of London in the 1980’s. 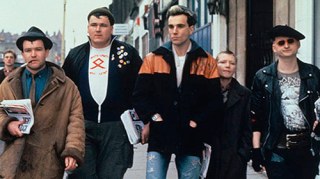 Indeed, the 1980’s was a difficult time as the country was divided. The racism that is tackled with My Beautiful Laundrette is the same racism that we see in 80’s-set The Is England in 2007 (The picture on the right must’ve been a reference for Shane Meadows). There is a sens eof community that appears to be lost due to the attitudes towards immigration – and Kureishi manages to show boths sides of the coin as, in an almost throwaway moment we see a cousin of Omar throw money to the ground to mock the white-businessmen who they work alongside. Salim (Derrick Branche) has clearly seen and experienced so much abuse, he is anti-White and clearly despises the culture that he is now a part of.
It is clear that My Beautiful Laundrette is not trying to play a moral-tale as, in many instances, he portrays an opposing opinion. When you see the success of the Laundrette, it is not long before we are reminded that illegal drug-trafficking is what has partially-funded the enterprise. Johnny – though we could argue is a tragic figure who is constantly reminded of his outsider status to Omar’s Pakistani family, we also know little about. We know that he ran with the skin-heads and squatted in flats … but he doesn’t follow the law.

Even Uncle Nasser has a mistress,but her pride in her status and the clear benefits she achieves from conducting this relationship (shown when confronted about her immorality by Nasser’s daughter) hints at a possible representational-role she is portraying. Rachel (Shirley Anne Field) is a figure to Nasser who fulfills his urges – and his dreams. Indeed, like Margaret Thatcher, she may be what he wants; he may take advantage of her change in laws and funding of private enterprise … but ultimately, she is a character of sin who is corrupting his values and comprimsing the future he wants. Inevitably, this affair will rip his family apart … and in many ways, Thatcher seemed to be responsible for the “ripping apart” of society. I’ll bet Nasser’s mistress believes “there is no such thing as society. There are individual men and women…”, because she – like many entrepreneurs in the 1980’s – was only looking out for herself.

Originally written/published for Man, I Love Films on 2 May 2013