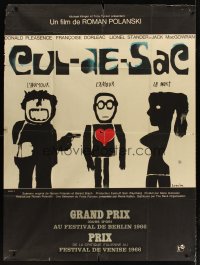 Roman Polanski remains a fascinating filmmaker to this day. Alongside Andrej Wajda and Jerzy Skolimowski, Polanski came to the fore in the late 1950’s in Poland. The BFI in London are screening all of Polanski’s films during January and February 2013 and through January, essays on separate films will be released on Flickering Myth in the hope that you too can join us in reflecting on Polanski’s diverse and ever-expanding career. Film essays will include Knife in the Water, Cul-de-sac, Repulsion, Chinatown and The Tenant.
Introduction
Knife in the Water set the standard for Polanski. For his directorial debut, it was nominated for Foreign Picture at the Oscars, losing out to Fellini’s 8 ½. If you lose out to a film considered one of the greatest of all-time, you can go home proud. Suffice to say, Polanski was sought after, eventually turning to England to create Repulsion and Cul-de-sac. A troubled production – Donald Pleasance turned up in a Lincoln to the blustery, small village, whilst Francoise Dorleac joined production with a small dog named Jarderane. Hardly small-scale, it remained true to Polanski’s roots – claustrophobic; a small three-way cast; use of deep-focus, etc. “Cul-de-sac was decidedly a Roman Polanski film. Its obsessional tone, its fascination with the mechanics of power and humiliation” (Polanski: The Filmmaker as Voyeur by Barbara Learning) On set, Polanski became demanding and brutal – not least because he had clearly based the film on his relationship with Basia Kwiatkowska, which ended four years prior. Though associated with many hallmarks of his films – this film particularly had a deeply personal edge.

The Castle on a Hill
The story is set-up as two criminals are fleeing the scene of a crime. Akin to Reservoir Dogs, we don’t see or know about the heist or robbery – but for whatever reason, they wind up on Lindisfarne. Albie (Jack MacGowran) has been shot, and can barely move; Richard (Lionel Stander) has been shot in his arm, so he seeks help and finds recently-married couple George (Donald Pleasance) and Teresa (Francoise Dorleac), who live within an old castle on the island. Teresa is unfaithful – our first sighting of her is topless with a neighbour’s son; George is weak and clearly cannot control his considerably younger wife – who we assume has married him for money.
In a direct parallel with The Ghost (titled The Ghost Writer on its US release), the family are isolated; cut off from the outside world as the phone line is disconnected. The marshy landscape and surrounding water combined with an upper-class elitism of the married couple, again connect with the Pierce Brosnan/Ewan McGregor thriller. 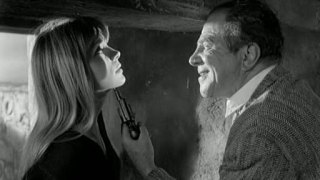 Power Games
Unlike The Ghost, though both films have an interest in the role of a powerful female, Cul-de-sac has a clear comedic edge – mocking the childish weakness of Donald Pleasance against the “Lan–dangangster” of Lionel Stander, who carries a certain Alan-Sugar-like charm.
The sexual-politics are established early on – from the reveal of Teresa’s infidelities through to the awkward manner that George is introduced, standing as a child carrying a kite. In this opening sequence, we witness the dynamic through the eyes of Richard – or ‘Dickie’ as he comes to be known – as he checks out the building before making his intentions known; again, Polanski places us in the place of the voyeur. But it seems ‘Dickie’ is not seduced by Teresa either – Dickie represents the stronger, dominant male opposed to George who, through the humiliating requests Teresa asks of him, is reduced to a bumbling outcast. Teresa almost becomes an accomplice to Dickie as she assists in digging the grave of Albie after he dies from his wounds – and consequently mocks George, laughing and drinking with Dickie. Hardly an example of the supportive wife. In a similar manner to Repulsion, though a key female-role, Teresa is never supported in her frustration of George. Though we laugh at his fear, her lack of support and ridicule of him ensures that she is never seen in a positive light either.

Why, come on in!
If the tone is unclear from the outset, when a family unexpectedly visits the castle, the humour is suddenly heightened. From the married-man who is flirting outrageously with Teresa through to a change in role as Dickie, to remain in the castle until his “boss” finds him, takes on the ‘Gardener/Butler’ job to keep up appearances. Guns are fired; stained-glass windows are broken. Though tense, we all stifle a chuckle when George fails to even hang his own picture back on the wall after a brief discussion of his artistry.
When researching Knife in the Water, it was clear that his exploration into social-issues was a rare theme he tackled in his debut, but I do believe that Cul-de-sac manages to touch upon some basic assumptions between the elitist, ignorant upper-class against the rough, hyper-masculine working class. Dickie manages to mock George tremendously to Teresa’s amusement and, only in the final moments does George manage to re-affirm himself and protect his wife. Of course, it’s too late then, and the guilt, shame and anger at his own initial inaction combined with the self-destructing nature of his flawed attempt at protection (destroying the only way of escape; giving Dickie an opportunity to use the tommy-gun) leads to only further upset. Knife in the Water ended somewhat ambiguously as characters continued their life with no clear change – whilst Cul-de-sac finishes as George, akin to Gollum in The Hobbit, perches atop of the rock, crying out about his own fate. He has lost the love he adored – not through the actions of others – but through his own inaction.
You need only look to the end of Chinatown to see a striking parallel – as Nicholson looks to his love, and sadness overwhelms him. They have lost their love – and they blame themselves. Though Nicholson’s ‘Gettes’ is not alone, George is – and as the credits role on the top of George’s misery it would be wrong to let him wallow in his own sadness. We want to comfort him a little and tell him: Forget it George, its Lindisfarne.