“I am not Simone Choule!”
Introduction
The key to unlocking the ‘Apartment’ trilogy is knowing that the three films work hand in hand. Themes intertwine and connect; ideas weave between each film and complement each other. My visit to the BFI recently informed me of the psychological element to the series – a Freudian analysis dictated that The Tenant explored themes of repressed homosexuality within the lead character or Trelkovsky. The film is not an easy watch, and reading before or after a viewing will thoroughly inform you and ensure that the subtleties and themes expressed come to the fore – because otherwise it will play out as a strange story about a cross-dressing tenant losing their mind. Indeed, there is much more to The Tenant.
The Last ‘Apartment’ Film
As the closing act to the ‘Apartment’ trilogy, it is worth reflecting on the three films including Repulsion, Rosemary’s Baby and The Tenant. All portray lead character who, we see their slow descent into a type of madness. The apartments in each film portray an enclosed space that becomes a place that limits their outlook – forcing the characters to become more introspective and lose their grasp on reality as they obsess and reflect on their own insecurities. Repulsion portrays Carol, the virgin who fears men and the sexual-attitudes; Rosemary’s Baby portrays Rosemary, the hip New Yorker who fears that the baby growing inside her has a more sinister-side she is yet to witness; The Tenant portrays Trelkovsky, the Polish tenant who fears the apartment he lives within as the neighbours complain and moans about the slightest noise he makes.

In Repulsion, the neighbours are only seen fleetingly as they indirectly witness Carol within the house until the finale and they all witness her self-destruction. In Rosemary’s Baby and The Tenant the neighbours become a larger role as in the former the neighbours are the Satanists who are too kind and too supportive of the unborn child whilst the latter shows every neighbour as a menace, each complaining about Trelkovsky’s noises and reminding how much of an inconvenience he is. Polanski clearly intends the films to be symbolic – and this is most apparent in The Tenant as on the surface the story is too strange to be taken literally. Repulsion could be simplified to depict a woman slowly losing her mind and Rosemary’s Baby could be simplified to depict a woman giving birth to Satan. The Tenant is more difficult – a man finding it difficult to blend in? A man who is secretly obsessed with transvestism? A man who slowly begins to believe he is someone else? This is a film that, as the Egyptian hieroglyphs clearly demonstrate, is meant to be symbolic. The question therefore is what is attempting to symbolise?

Family Problems
My own theory on the trilogy is rooted in the importance and influential nature of family. What defines hereditary illness and the impact of abuse within the family unit. Polanski has never been keen to use his own upbringing as an excuse to define the pessimism in his films, but the parrallels between The Pianist and The Tenant are more than mere coincidence. A “persecuted man locked inside an apartment, obliged to keep silent out of mortal terror from the neighbours, living or dying on the basis of whom he chooses to trust” writes Maximilian Le Cain in his essay Into the Mouth of Madness: The Tenant. He writes of a further parrallel as both characters use a window as a means to potentially kill themselves.
With this in mind, key photographs of family members are used throughout the trilogy – and in Rosemary’s Baby, the film itself is about the beginning of a family unit. The single family photograph that depicts the detached-gaze of Carole is used throughout the film and noted in the final shot, hinting at an abusive family that may have influenced her actions in adulthood. In The Tenant, we see Trelkovsky set up his family portraits as one of the first actions when he moves into his flat – and, when staying with Stella, it is her family pictures that strike a chord as Trelkovsky physically rips the images in half, throwing the pictures across her flat and destroying her apartment. His own insecurities and lack of confidence may be rooted in his own upbringing – and his destruction of Stella’s family album may tease an envious attitude that Trelkovsky desires. Even the couple who live alongside Rosemary in Rosemary’s Baby and the older couple who own the apartment Trelkovsky lives within almost take on a parental role. Akin to parents scolding their child for minor misdemenours, Mr Zy seems to believe it is his role to dictate what Trelkovsky can and cannot do – it would not be unexpected if Mr Zy told Trelkovsky off witht he final words “when you have your own house, you can make as much noise as you want”. The scream that Choule lets out, (clearly homaged in The Usual Suspects as the lone survivor shouts “Keyser Soze!”) could represent the ongoing frustration of those born into a family that corrupts and changes you – you can choose your friends, but you can’t choose your family.
The three films together all explore the influence your upbringing has. The abusive Father in Repulsion; the corrupted and destructive marriage the baby has been born into in Rosemary’s Baby and the relentless expectations forced upon Trelkovsky all explain the multitude of issues that adults often hold. And yet, as we know little of the families within each film – or in the case of Rosemary’s Baby, we only see the outcome of the family unit at the end – there is an unspoken element. Despite the influence of the family… it is also the one element of our lives that we all feel uncomfortable discussing. 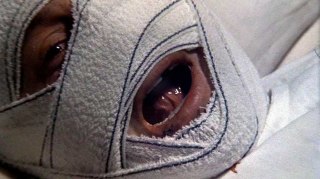 Sexuality
Mary Wild explained in her discussion Projections at the BFI that the undercurrent to The Tenant is Trelkovsky’s repressed sexuality. That the film portrays him uncomfortable with women throughout – the only character he is close to, and is comfortable touching is a male character. Trelkovsky represses his sexuality and it manifests itself in the character of Simone Chule instead – a feminine woman with long hair, make-up and a sexy dress. Though I can appreciate Wild’s interpretation, I am wary to make a clear judgement on the filmmakers attitude to this.
It seems like a naive assumption that transvestism and homosexuality is inextricably linked. In addition to this, any interpretation that Trelkovsky is going mad seems to associate insanity with homosexuality too. In both cases, whether this interpretation is true, it seems simple at best and insulting at worst. Even the poster hints at such ‘deviant’ acts as horrific: “something altogether new, altogether chilling”. Personally, there is moment whereby Trelkovsky kisses Stella and, this moment, seems to indicate at heterosexual attitude – and his behaviour following this moment does seem to temper his transformation into Simone Chule. Having said that, the character Georges Badar does seem strangely out of place – and the few words this character states all have a strange tone. There is clearly something extra between Trelkovsky and Badar – but I’m not convinced that Trelkovsky is reciprocating any feelings towards Badaer. Could it be that Badar simply seems attracted to Trelkovsky as he has an emotional attachment to Simone Chule, the spirit that resides within Trelkovsky?
Symbolic
The Tenant is not an easy-watch – and I would not recommend this as a first viewing. It truly is the final part of a three-film series so it is essential to watch Repulsion and Rosemary’s Baby, if only for the conversations afterwards that accentuate the multiple layers within the films. The Tenant clearly has multiple layers and they are not easy to grasp – especially on a first viewing. But this is clearly the point Polanski is making – that cinema is so much more than a passing-of-time. Cinema is deeply personal, and the links with The Pianist, give the indication that the entire concept of the ‘Apartment’ trilogy has connections to much more personal elements of Polanski’s life than he lets on. The casting of himself in the lead role is also key – as it begs the question of how much of Trelkovsky is there in Polanski? Maybe the confines of Hollywood, represented by the apartment, and the pressures placed upon him in America has fed into his work – The Tenant was made two years after Chinatown and it was his final film before the fateful event that would ensure he never worked in America again. Maybe that was exactly what he wanted.