“Just because I’m telling you this story… doesn’t mean I’m alive at the end of it”
Introduction
Oliver Stone claims that, when writing Scarface, he was addicted to cocaine and used the writing to help him kick the habit. In addition, producer Jane Hamsher, explains how she and Stone took mushrooms when making Natural Born Killers – and was nearly arrested in the process. In 2005, Stone was arrested for possessing an “undisclosed” drug. Suffice to say, Oliver Stone’s latest film is about drug-dealers and the industry itself – but unfortunately, its more interesting reading about Stone’s own exploits than watching the flawed Savages.
Narrated by “O” (aka, ‘Ophelia’ played by Blake Lively), she recounts a tale whereby a group of mexican drug-lords, including Lado (Benicio Del Toro) and led by Elena (Salma Hayek), kidnap her in order to successfully destroy “good” drug-dealers Ben (Aaron Johnson) and Chon (Taylor Kitsch). In terms of establishing the ‘good’ and ‘bad’ characters – the good characters are clearly Ben and Chon whose vices seem to be that they are either too soft-hearted (Ben) or exceptionally – in a military sense of the word – aggressive (Chon). Indeed, ‘O’ tells us that Chon, when making love, is trying to literally “fu*k” the war out of his system – culminating in a “wargasm”. Ben, on the other hand, is a drug-dealer in California for one half of the year and educating African children the other half of the year. How these two even became friends is beyond me – but we need to accept their friendship and also need to accept their three-way relationship with ‘O’ as she loves both men, and both men are happy to share her. Stone portrays this by showing respective sex-scenes within the first 15 minutes of the film. And another three-way sex-scene on the night before ‘O’ is kidnapped.

Too Self-Aware?
Crucially, ‘O’ tells us at the start of the film that just because she is narrating “doesn’t mean I’m alive” by the end of the film. She clarifies these things from time-to-time as if we don’t know the nature of a narrative. We’ve all seen American Beauty and Taxi Driver – and know the innovative use of a narrative in The Lovely Bones and Atonement. But she clarifies and breaks down the fourth-wall anyway.
Oliver Stone’s clear political-stance toward the neccessary legalisation of drugs is shoe-horned into the story. In clunky-monologues, ‘O’ compares drug-dealing to corporations such as Microsoft and Apple. I can see how capitalism – and the ‘business’ of drugs – is a major issue, but I think the anti-drugs political argument is a little bit more complex. It seems that Stone argues that drugs should be legalised for the sake of peoples health and safety with regards to the violent methods criminal-gangs use to take ownership of drug-dealing groups . No characters are seen to use drugs in a harmful manner – they might as well be love-hearts and chocolate’s. Within the world of Savages, people can use, take and deal drugs to the mass populace with ease and with little-to-no consequence, whilst relationships between three characters never result in jealousy, envy or frustration in any way. The only ‘bad’ thing that happens is due to the lack-of-sanity in Elena’s henchman Lado – and the dominance in the market Elena seeks. 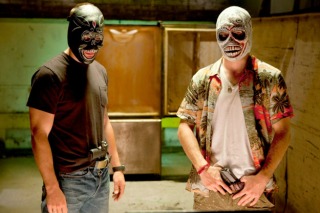 The Plus Points
Despite these recurring issues that fatally-wound the film as a whole, there are specific sequences that could have – and should have – been integral to the plot. In one sequence, Ben and Chon strike against Elena’s men and steal their money. Ben – the soft-hearted, African-child teacher – freezes when confronted; Chon swings round, shoots the ‘villain’ in the head only for the blood to explode onto Ben’s face. The acknowledgement of Ben’s fear in this alien-scenario is thoroughly engaging, and depicts Aaron Johnson at his best. We see hints of Ben’s fear as he sinks deeper into the underbelly of the profession. But it still rings untrue – how can an exceptionally successful drug-dealer be so out-of-his-depth? He knows what Chon is skilled at – morally, he must’ve thought about the nature of those actions. The Day of the Dead masks hark back to the iconic sequences in Heat, The Dark Knight and most recently, in The Town – and add a real sense of culture and skill to Chon’s plan of action – but we’ve seen it before. 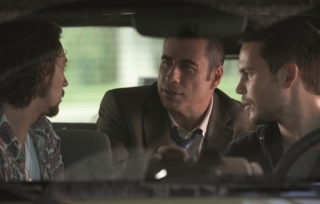 Oliver Stone – We Expect Better!
Oliver Stone is an exceptional filmmaker and, back in the 1980’s and 1990’s, he was one of the best. From writing Scarface, through to his direction of Platoon, Wall Street and JFK, it is hard to imagine that this is the same person. John Travolta manages to become a joke – a funny, well-acted joke, but a joke nevertheless. Whilst token-nods to Oliver-Stone-isms, simply seem forced; the drugs come from Afghanistan and are collected by the military; the capitalism of the drug-industry; the intercut-scenes and jarring editing-techniques. These are all things which we have seen before, to a greater effect, in Stone’s other films. In Savages, they are cheap and unneccessary.
That is what truly summarises the film; Cheap and unneccesary. Despite an aspiration to be taken seriously, it’s so hollow. We credit Shane Salerno with writing the script and, for me, it is unforgivable to include lines packed with so much emotion (“You don’t change the world, the world changes you”), only for the line to be ignored seconds later. ‘O’s narration is jarring, uninteresting and completely lacks passion. Savages has this type of false emotion running throughout the entire film. Though we are expected to care, we don’t relate to the characters in any way. Especially when the film ends – in my screening, there was an audible groan when the narrative takes an innovative turn. That’s not what should happen if the audience is on your side; and with Savages, the audience is sat, arms crossed, frustrated at what has happened to the great Oliver Stone.