“Ah you think darkness is your ally? You merely adopted the dark. I was born in it, molded by it. I didn’t see the light until I was already a man, by then it was nothing to me but blinding!”
Introduction
This will reveal much about The Dark Knight Rises, and it equally refers back to my posts on Batman Begins and The Dark Knight. It turns out that my assumption about economic-inequality becoming a theme throughout the trilogy truly came to fruition in The Dark Knight Rises in an epic conclusion. Do I recommend the film, yes. Ten-out-of-ten. Five-Stars. Thumbs Up. But I would like to think that you read these posts for more than a mere rating. While I have the chance though, I would like to specifically highlight how fascinating Anne Hathaway was. After a second watch, my personal stand-out moment is after she fights-back against Stryver (Burn Gorman), Dagget’s (Ben Mendohlson) employee, and switches from martial-arts expert to shrieking ‘innocent’ victim. That scream, in and of itself, is what establishes Anne Hathway as an incredible incarnation of Catwoman. But the themes of the film is what we are here to disect, so without further ado…

Relevant and Inspired
The set-up is inspired. Batman (Christian Bale) is retired and, effectively, is not needed due to the Dent act giving the police complete control over the sentencing of criminals involved in organised crime. 8-years is a long time and I doubt it is a fair judgement for many inmates. For the Western World, we are 11 years away from 9/11. We are 7-years away from the London bombings on 7th July 2005. Osama Bin Laden is dead. Saddam Hussain is dead. Qaddaffi and Kim Jong-Il. All have passed on. Terrorism is far from over, but we are in a different world now. The crazed-belief system of ‘The Joker’ is not as relevant – and the gaze turns inward. We look underground to the foundations and the sewers beneath our own societies.
Sequences within The Dark Knight Rises almost step into wish-fulfilment territory as we see an attack on bankers in an iconic stock-trading centre. The Occupy-Movement continues to argue it’s case to seek justice. Justice to hold responsible those who created the deep debt many Western countries find themselves within. The question is how – How do we achieve equality? Alfred (Michael Caine) begs Bruce to use his power as an influential, wealthy and technological-power to assist and directly help with the police, rather than use Batman, to ensure peace. Right-wing attitudes to crime, as portrayed in Batman Begins, we see is problematic: Capital punishment has no place in Gotham. Understanding and fairness has to be balanced by definitive action and consequence. But now, the end of The Dark Knight is undercut as the lies and false-figure in Harvey Dent has established a corrupted set of ideals. A power and (another theme of The Dark Knight) trust in the police-force has created corruption within the force – and the morality of Police Comissioner Gordon (Gary Oldman) is mocked by other officers. Ironically, the lie of Harvey Dent is what corrupts Gordon himself.

Truth and Hope
Indeed, it is ‘truth’ that is at the forefront of The Dark Knight Rises. The truth behind Harvey Dent. The truth Alfred reveals to Batman about Rachel’s letter to him. The true background to Batman. The theme of Fear from Batman Begins is brought up again, as it is fear that (originally seen as a vice in Batman Begins) becomes a virtue – a fear of death. The theme of trust in The Dark Knight is thrown back in Bruce Wayne’s face, as he trusts Miranda Tate (Marion Coitillard). Indeed, without truth and honesty, it is inevitable that trust (in a lie/liar) is misplaced and fear (of the consequences of a lie) will spread. The Dark Knight Rises dictates that governments need to be transparant and honest. Hope for the future, in times of struggle, can only be achieved through uncomplicated, clear politics that everyone can clearly understand and appreciate.

Economic Advantage
One thing which is incredibly complicated is the recurring theme of economic separation as established in the previous two installments. The ‘Now Playing’ and ‘/Film’ podcast seem to highlight how you could interpret the film – and I’m paraphrasing liberally – as an example of how “if the poor people fought back against the rich people it wouldn’t work and is clearly wrong”. ‘Now Playing’ imply that the film highlights Nolan’s right-wing attitude whilst Devindra and Adam, on /Film, tackle Dave’s ‘quote’ from film-director Joseph Kahn by clearly arguing that we are expected to somehow ‘relate’ to Bane’s (Tom Hardy) goals. I am sure by now, even with the understanding I gave to The Joker’s belief-system, you can guess where I stand.
I firmly believe that characters – especially Selina Kyle – are clearly created to show how the support and army that Bane manages to muster is because people do agree with his stance. The villainous element is portrayed as Bane – and Talia Al Ghul – lie about their message. The ‘truth vs lie’ issue is raised again. They use the anger and frustration of criminals (people who are products of the economic-inequality) to turn others against the system. Afterall, they are well-aware that the bomb will detonate killing everyone anyway – their end-goal is not about equality. It is about complete destruction and genocide – killing everyone in Gotham as it is a city that “needs to be destroyed”, in complete allegiance to Ra’s Al Ghuls exceptionally right-wing, even fascist, position. The only reason we wait 5-months before the bomb detonates is so that the city torture themselves into thinking there is hope. Furthermore, for Bruce Wayne to truly appreciate the challenges the underclass face, he himself has to lose all of his wealth, lose all his power and be placed into a prison. Only through this direct-experience does he understand the desperation of poverty. In that regard, it is a very similar situation to how he becomes Batman in Batman Begins.
My favourite lines in the film – and this is down to flawless acting from both Tom Hardy and Ben Mendolsohn – is when Bane confronts Dagget after Miranda Tate manages to control Wayne Enterprises.

Bane: Do you feel in charge?
[open hand resting comfortably on Daggetts expensive suit dressed shoulder]
Dagget: I paid you a small fortune-
Bane: And you think this gives you power over me?
This small exchange portrays how helpless a Capitalist-Gotham is towards Bane’s power. He is powerful because, akin to The Joker, his belief system does not come from a financial-desire or any care for wealth. He was “born into” a world without money, and therefore doesn’t need it to survive. He is an animal who survives through brute-force. The back-breaking defeat of Batman is due to Batman’s assumption that this ‘animal’ can be tamed by western-gadgets and skills. Batman only defeats Bane after he has gone back to becoming an animal himself – forced to literally ‘fly’ like a Bat – to escape the prison. 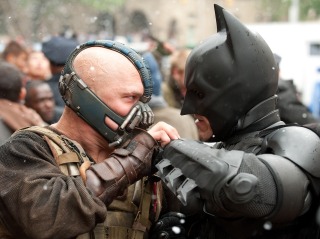 The Finale
The scale of this film is simply fascinating. Set over 6-months – we see Gotham become a wasteland. This time-frame, which Nolan happily ensures we are clear on, give an indication as to the horrors of the society. The montage showing the deaths and riots almost hark back to the Summer of 2011, whereby London had three-nights of riots which spread across Britain. Imagine if these riots continued? Imagine the state of London after 1-month of riots? after 3-months? It is unbearable to think about. But it is important to consider this context.
This is why John Blake (Jospeh Gordon Levitt) is such an important character too. He is the constant source of hope – hope for the orphan boys in the home and hope for Gotham itself. We see how his morals stay intact – and he doesn’t compromise. He is shocked about the lie Gordon led others to believe and ensures that he does not do the same. We see how, rather than merely showing a pay-off to a ‘threat’ of police destroying a bridge, he understands the ‘shackles’ police are bound by to protect the society. He is angered by their decision to destroy the bridge – but see’s how they are following orders. But he cannot follow orders himself because he doesn’t believe in this expectation dictated by a police-state; he works outside the law. He knows that he is expected to provide hope to the city – so that the children, and citizens, know that they are safe in the hands of a hero. Whether it is Batman or not.

The constant theme of ‘Truth’, I believe, is what Nolan wants us to take away. Not a ‘truth’ in complicated-details about police-control or the definition of justice. Not even the ‘truth’ to determine what defines a true villain in society. But the simple fact that there is inequality. Take out all the details and red-tape, and akin to the lack-of-funding for the Orphanage, there are innocent children who are losing out. There are those who are born into poverty who are not being supported or helped. We cannot live in a world whereby your future is dictated by where you are born – or the financial-circumstance of your parents. To think that it is simply ‘luck’ whether you gain a good education and whether you have access to a healthy life is a tragic outcome of a capitalist society.

The truth is the world – and indeed, the Western world – is lying about equality. And the struggles we face will continue unless we acknowledge this falsehood.