“Now, you think because your mommy and your daddy got shot, you know about the ugly side of life, but you don’t. You’ve never tasted desperate…”
Introduction
I can imagine that the selected quote is not the first one which comes to mind when you think about Batman Begins. The glib remarks Batman uses and the philosophical theories of Ra’s Al Ghul (Liam Neeson) all have a more memorable place in the franchise. But I think the scene between Falcone (Tom Wilkinson) and Bruce Wayne (Christian Bale) sets the scene for what plays out over the three films. Ever since I re-watched Batman Begins, I wanted to analyse these themes. I believe that there is an undercurrent to these films that will peak in The Dark Knight Rises, whereby social inequality is at the centre of the Christopher Nolan series. Each film has their own narrative and unique elements that are unto themselves, but I am interested in the themes that run throughout the trilogy. I have not read the graphic-novels or comic-books, so I shall not be informing you of the roots of pre-production. Instead, I’d like to deconstruct themes and ideas that you may not have noticed – and may provide an additional layer to your own understanding of the series. 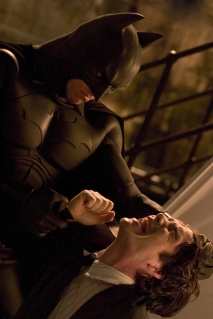 Fear
The unique theme that is set-up at the start of Batman Begins is the notion of fear. How fear can strengthen you (“What do we do when we fall? We pick ourselves up again”) and how it can destroy you (The fear of the underbelly of Gotham – Falcone tells Wayne how it “is a world you always fear and don’t understand”). The very guise of the Dr Crane/Scarecrow (Cillian Murphy) is about instilling fear and panic in others – as fear and panic then gives an opportunity for control. Indeed, Dr Crane is abusing his power as a psychiatrist by moving patients, incorrectly, to the Arkham Asylum for his own means to complete the directive from Ra’s Al Ghul.
More interesting is the fear which Bruce Wayne has. Deep down, Ra’s Al Ghul questions what he truly fears. At the same time, he is questioned about his anger and where it comes from. The answer is one and the same. His Father is his role model – the man he looks up and the man who saved him from the bats. His Father is also the one who he is told is responsible for his own death – a death which Bruce blames himself for. Such a fascinating way to connect fear to anger. Yoda has a similar message in Star Wars Episode 1: The Phantom Menace: “Fear leads to anger. Anger leads to hate. Hate leads to suffering”.
Wayne’s deepest fear is that his Father, his role model, was flawed and at fault – but Ra’s Al Ghul ensures he faces this fear; his Father was at fault. More importantly, Bruce realises he is not responsible for his death.

Social Desperation
The fear aspect of the story is the central theme throughout the film, but it is the opening third of the film that establishes a range of political attitudes and approaches to social-decay. One of the first things Ra’s Al Ghul tells Bruce is how “someone like you is here by choice” stressing how Wayne, a man of affluence, cannot be a victim of poverty. And surely cannot be in such dire circumstances without a certain sense of self-loathing. When we see the flashback, we see how his parents directly challenged the social-decay by setting up the “cheap transport system” to bridge-the-gap between the social-divide. His Father did not fear the crime on the streets and fell victim to the reality of desperation – his “understanding” towards the mugger is what ensured his fate.
Ra’s Al Ghul is the polar opposite to Thomas Wayne, Bruce Wayne’s Father. Ra’s Al Ghul believes that “a criminal is not complicated” and that capital-punishment – taking a mans life – is sometimes a neccessary form of justice. Al Ghul has no tolerance for criminal behaviour whatsoever. This is a very right-wing agenda at odds with the left-wing stance Thomas Wayne holds. Thomas Wayne believes that “Gotham’s been good to our family, but the city’s been suffering. People less fortunate than us have been enduring very hard times.”. Thomas Wayne knows that crime is complicated and it is a product of a broken society. A society he wants to re-build. Opposed to Al Ghul – who wants to pull it down.

In both cases, Bruce Wayne knows that his role models have conflicting expectations of a society; His Father is too compassionate, saying “don’t be afraid” to a child who has witnessed someone murder his Dad and constantly re-assuring the mugger when he is robbed; Ra’s Al Ghul believes that actions are neccessary and, justice, can be determined by eye-for-an-eye, tooth-for-a-tooth logic. Indeed, ‘Economics’ are what Ra’s Al Ghul explains the Legion of Shadows attempted to use to destroy Gotham – but it was Thomas Wayne who thwarted their attempts as he used the money for good. Bringing people together – Wayne is optimistic about the future whilst Al Ghul is pessimistic about the actions of man. The social-inequality, front-and-centre of the Batman story. Both want better worlds and both want a better society – but their ethics are completely at odds. This is what shapes Batmans image and outlook – he will “turn fear to those who prey on the fearful”, effectively shielding his compassion with an image of mythical-power and legendary-combat-skills. In contrast to this, he reveals his role, not as a judge-and-executioner but as a believer in justice, by ensuring the criminals are put to trial.

Revenge is not Justice
The defiition of law is what clarifies the social injustices further as, to paraphrase Rachel Dawes (Katie Holmes), revenge is selfish whilst justice is about harmony. It is a cross to bear, sacrificing the personal desire for the sake of others. Bruce Wayne initially attempts to shoot his parents killer, but upon witnessing the act, realises that there is no solace in committing murder himself. This understanding is rooted in his belief system when he refuses to kill a separate murderer in the house of Ra’s Al Ghul.
To close this analysis, it is worth reflecting on the opening, and closing, scenes. Rachel finds a spear-like stone shouting “Found it!” as Bruce retorts, “In my Garden”. Again, he stresses what he believes is rightfully his. It is Bruce’s garden, and does this automatically gives him power and control of everything in it? Children, wherever they are born, should not be in a world of injustice and inequality. The owners of that world – or Bruce, in his garden – has a responsibility to look after it and without that responsibility, he can get hurt. He falls down a well, he see’s what is underground. He see’s what the foundations are of the garden he claims is his. He is scared and is protected by his Father – he is protected by his priveledged upbringing. Re-emerging, he realises that the stone is not his to take – and passes it back to Rachel. Society is something we are all a part of – and those in a position of affluence and power have a responsibility to keep for everyones sake.
Batman is giving back the stone. He is giving society back what it deserves. The final lines of the film: “I never said thank you”/”You’ll never have to”. To be protected from the evils and ills of a society is not a gift from above – we shouldn’t be saying “thank you” to governements squeezing out a few pennies to support schools and health. It is the duty and responsibility of those in office to, above all, look after its citizens.