“Did you ever see an elephant fly?”
Introduction
Like my assumption that Pinocchio was merely a story-about-a-puppet-with-a-long-nose (it is anything but…), I could not really recall the story of Dumbo. I could remember a circus … and the bit when he jumps out the fire-house … and I knew the song “When I See An Elephant Fly” very well from a Disney cassette I had as a child. The first thing I noticed before watching was how short it is – only 1-hour 4-minutes! The Disney Studio lost money on Pinocchio and Fantasia, and to make matters worse, strikes hit California. The hey-days of the Hyperion Studios – whereby artists would work into the early hours of the morning – were over. In addition, a number of artists had joined the studio from the East Coast and they didn’t have the same work ethic as Walt Disney.

A Stork Delivers Dumbo
A wholly American story, the film was an adaptation of a story by Helen Aberson and Harold Pearl, and adapted by long-term Disney-writer Joe Grant. It also featured something Disney himself adored: trains. The story begins as a Stork delivers a new baby to Mrs Jumbo (Hardly the most imaginative name there!) and the baby Elephant – though incredibly cute, has enormous ears and is nicknamed Dumbo. He is taunted by the other Elephants and, due to his large ears, he is mocked by visitors to the Circus. Mrs Jumbo gets angry, bordering on madness, and is isolated. Dumbo though, with the help of his mouse-friend, manages to literally break-free from the constraints of the circus and manages to reach his full potential.
The story is so tragic – we witness a child being bullied by adults, before losing his mother. Walt and Roy had lost their own Mother in 1938, whilst their Father passed in 1941. To imagine Walt and Roy observing the artists portray Dumbo losing his Mother is difficult to imagine … but conisder how they were working on Bambi too must have been truly unsettling.

Modern American Tale
Thematically, it is a very American story. There is excessive colour with a vibrant landscape – nowhere near as dark as Pinocchio. There is a capitalist-edge, as Dumbo – and all the elephants – are effectively employees working for the Circus. The Circus does not treat them well – isolating his Mother and humiliating Dumbo by dressing him as a clown.
But the look of the film is ‘cartoony’, it ignores the more classical and European elements of the previous three films. In fact, one of the stand out sequences is the surreal dream-sequence when Dumbo gets a little tipsy and see’s dancing pink elephants – defined outlines and neon colours dominate the screen as characters dance across the screen. Elephants morph into snakes and morph again into a belly-dancer, and then again, into a floating circle before opening as an eye. A parody on Surrelism maybe, but it clearly was ‘of its time’ as the 1940’s became a point whereby Surrealist artist Salvador Dali began promoting himself moreso – before working with Disney on the only-recently-finished Destino. Despite this interesting use of animation, the film had to save money on its animation by using large watercolour back drops and cutting back on the special effects – indeed, compare the animation of water in Pinocchio with the animation of water in Dumbo and you can see a significantly ‘cheaper’ quality. Disney knew that this film was all about the story – and it is indeed what makes the film unforgettable. 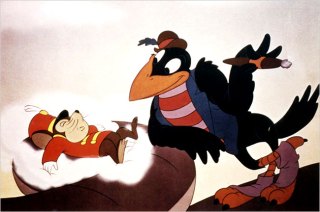 Flawed but Memorable
More caricature than realism, the film primarily used artists who worked on the Silly Symphonies and therein lies the importance of this film. The animators working on Dumbo, in many cases, decided to cease working for Disney after the film – despite their work in the previous decade. Some of the greatest animators, referred to as the ‘Nine Old Men’, were genereally working on Bambi, but the animators and artists who taught the ‘Nine Old Men’ were working on Dumbo. Specifically, Art Babbit, Bill Tytla and Walt Kelly – all of which worked on the first three-feature Disney films.
The crows are a very small part, but their characterisation and song, are definately one of the films highlights. I would argue the film is flawed – a little too ‘loose’ for me in its animation – but it has a beautiful story, with an incredibly cute elephant at the centre of it. And I guess that is why it was so successful, and crucially, a financial success for the Disney studios…