Best Episode of The Simpsons? Season 6: Two Dozen and One Greyhounds

In an attempt to get completely up-to-date on one of my favourite TV-series The Simpsons, after I watch each season, I will choose my favourite episode…
It was either this episode or Lemon of Troy (an episode about a Lemon Tree and the rivalry between Springfield and Shelbyville). I chose this one episode because I simply adore Santa’s Little Helper – and I wouldn’t be suprised that my current obsession with Disney plays a part as the episode references Beauty and the Beast, One Hundred and One Dalmations and Lady and the Tramp. In fact, Matt Groening has always been happy to admit how much he himself loves Disney – and One Hundred and One Dalmations specifically was a huge interest for Groening due to how the characters were “cartoons who watched cartoons” – much like The Simpsons watched Itchy and Scratchy.

The episode seems to flow so well with some perfectly-timed jokes. Starting with the exciteable Santa’s Little Helper in the house – as Bart and Lisa try to tire him out by throwing a ball, he continues so much that the dog literally picks up Bart and Lisas hands to continue the game. Then we have a more shocking moment when Santas Little Helper “mounts” a female greyhound at the race track. We see Bart and Lisa confused: “It looks like he’s trying to jump over her but can’t quite make it. Come on, boy! You can do it!“. Absolutely brilliant.
Then the finale – as Burns steals the dogs to reveal that he has taken them to create a puppy-tuxedo! In one of the best songs in the entire series, he sings “See My Vest” –  a parody of “Be My Guest” from Beauty and the Beast – before his plan is foiled by Bart and Lisa. Unforgettable Simpsons indeed. My favourite moment doesn’t have much talking – but I’ll place the description below. Seriously a laugh-out-loud moment for all! 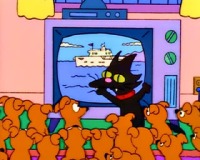 The family and the puppies all watch TV. A woman in a bikini suns herself on a boat, and one of the puppies gets up on its hind legs and paws at the screen. Marge chuckles, “Look at Branford II! Isn’t that cute? He thinks he’s one of the Models, Inc.!” The family join in their laughter. Snowball II, listless, tries the same stunt as Branford II, only to be rebuked angrily by Homer: “Get that cat out of the way!”

Bart: Hey, boy, you want to play fetch?
[Santa’s Little Helper looks up, tired, then puts his head back down]
Aw.  Me and Santa’s Little Helper used to be a team, but he never wants to play any more since his bitch moved in.
Marge: Bart, don’t ever say that word again!
Bart: Well, that’s what she is.  I looked it up.
Marge: Well, I’m going to write the dictionary people and have that checked. Feels like a mistake to me…