Mark Wahlberg, following The Departed and The Fighter had began to establish a much-more respectable and credible career as a lead actor – especially how these roles were alongside his successful comedy straight-guy roles in The Other Guys and Date Night. A far cry from Max Payne and The Happening. Unfortunately, Contraband seems to fall into the ‘generic-action-film’ category. It is convuluted and seems to try too hard in gaining your interest and attention. Everything seems to be at stake and he can’t trust anyone – and yet, he does trust others and those stakes are easily surpassed. Through luck and coincidence, we can rest assured that our lead-man will ‘save the day’. But I don’t think anyone by the end of the film really believes it matters.

The ‘Smuggling’ Story
Contraband is an action-thriller starring – alongside Mark Wahlberg – Kate Beckinsale, Giovanni Ribisi and Ben Foster. Wahlberg is Chris Farraday, an expert in the field of smuggling, who left the profession for the sake of his family. But he was pulled back in by his brother-in-law Andy (Caleb Landry Jones), when Andy screws-up a job for drug-dealer and smuggler Tim Briggs (Giovanni Ribisi). 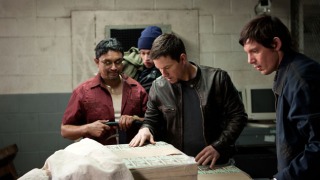 In 2008, director-of-Contraband Baltasar Kormákur starred in Reykjavik-Rotterdam. Successful in Iceland, Kormákur realised the film would work exceptionally well by transferring the story from Iceland to America. I have not seen the original, but I would like to think that the plot had a little bit more tension. By moving the film to ‘the ports’ in Louisiana, it seems like the film has been modelled on the look and feel of the second season of The Wire. Huge crates and sly-bribes ensure that you can control what is coming in and out if you have the authority and power.

As the film rests solely on the success or failure of the ‘job’, it is important to be very clear on the reasons why Chris Farraday believes it is neccessary to get back into the smuggling trade int he first place. Is he close to his brother-in-law? Does he owe his brother-in-law any type of debt? To both questions, the answer is ‘no’. Brother-in-law Andy, played by young-actor Caleb Landry Jones (who portrayed Banshee in X-Men: First Class), has been told – by Farraday – to get out of the illegal business many times but Andy ignored him. Halfway into the job, Andy risks everyones life for the sake of a drug-score. Personally, I think Chris Farraday should’ve taken Andy to the police and left him there. Tim Briggs, though dangerous and violent, didn’t appear to be the type of character who was paying off the cops – not to mention how if Andy testified against Briggs in court, he would surely get a shorter jail-term. But no, Chris ‘needs’ to risk everything for this little brat. This is the story we’re dealt and this is what we run with – no realism, nothing to relate to and no clear purpose. Just a series of action sequences that we hope will cover the gaping holes in the plot. You know this is true by the final act, as suddenly everything goes a little crazy – twists that were obvious from the outset apparently ‘raise’ the stakes, tongue-in-cheek jokes conclude storylines which we were invested in and it seems that people remain ‘dead’ until the perfect moment whereby Wahlberg can take responsibility for ‘saving them’. 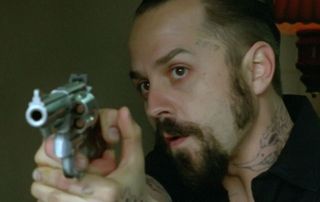 Stylish without Substance
In fairness, new-director Baltasar Kormákur is not the problem here. The way he shoots the scenes is often handheld and, in something I have not seen as often in a mainstream Hollywood film, he will comfortably zoom-in at poignant moments, whilst remaining handheld. On the one hand, he adds a unique flair and stylish edge – on the other hand, it can take a while to get used to and can take you out of the moment, focussing your attention on the way the scene is shot rather than what is important to the story. 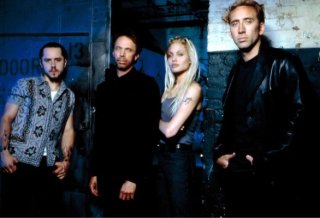 But we know already how weak the story is. I checked my twitter-feed for #Contraband shortly after viewing the film and someone noted how the film is very similar to Dominic Sena’s Gone in Sixty Seconds. Personally, I loved Gone in Sixty Seconds so the comparison seemed unfair. Contraband has the same “pulled-back-in due to a foolish-brother/brother-in-law” narrative which, coincidentally the brother is played by Giovanni Ribisi in Gone in Sixty Seconds. Ribisi was youthful and foolish, but as a viewer, you liked him and it was great to see the dynamic between Ribisi and Nicholas Cage. There is no such chemistry in Contraband between Wahlberg and Caleb Landry Jones. The ‘team’ who were stealing the cars in Gone in Sixty Seconds were likable and interesting to watch – Vinnie Jones cast as the mute professional (good choice on the ‘mute’-ness) and Donny (Chi McBride) specifically stood out. Then you have the comparative ‘villain’ – Christopher Eccleston’s wood-obsessed villain against Ribisi’s murderous druggie. Again, there is no contest – crazy-wood-guy wins everytime. Bottom line is – stylish cars in LA trump counterfeit-money-on-boats in New Orleans any day. The list could go on – and I haven’t even mentioned the underused Kate Beckinsale in Contraband.
Contraband has one saving grace with an almost-cameo appearance from Diego Luna, but when that is over, it really is back to the convuluted plot. A good effort on Kormákur’s part, but a bad move on Wahlberg’s – lets hope that this isn’t the start of a generic-action-movie trend for Marky Mark.