Best Episode of The Simpsons? Season 2: Three Boys and a Comic Book 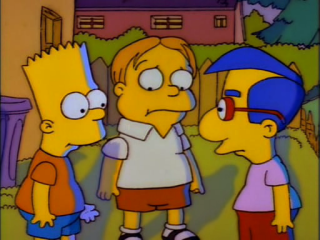 In an attempt to get completely up-to-date on one of my favourite TV-series The Simpsons, after I watch each season, I will choose my favourite episode…
The next episode, that I believe is the best of the second season of The Simpsons, is Three Boys and a Comic Book. Equally memorable for the first appearance of ‘Comic Book Guy’ and Radioactive Man, it also includes some flawless sequences between Bart, Milhouse and Martin.
Broken into two different acts – the first-half whereby Bart is working for Mrs Glick and trying to save up enough money to buy the comic, and then the second act whereby Bart, Milhouse and Martin fight over the comic book. By far, the best section of the episode, is when Marge recalls how she saved up money, only to recommend Bart to do the same – he says “Me? Get a Job…” and the show turns into The Wonder Years, sixties-music and all. I remember watching this when I first bought the box set and, alone in my room, I burst out laughing. Brilliant, unexpected gag.
The episode references films including Gone with the Wind (1939) (“Iodine … anything but the Iodine!”, The Treasure of Sierra Madre (1948) and Hitchcock’s Saboteur (1942). My personal favourite joke involves Mrs Glick recounting the death of her brother … 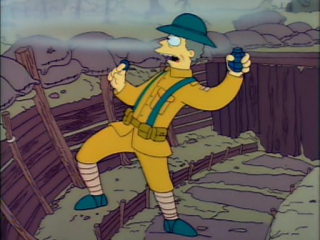 Mrs Glick: Oh, that’s my brother Asa. He was killed in the Great War. Held a grenade too long.

[Flashback to Asa in the Great War]
Asa: This one’s for you Kaiser Bill, special delivery from Uncle Sam and all the boys in D Company. Yeah, Johnny, Harris, Brooklyn Bob, and Reggie, yeah, even Reggie, he ain’t so stuck up once you get to- [Grenade explodes off screen]