“See that cockroach? Tomorrow morning, we’ll be dead and it’ll be alive. It’ll have more contact with my wife and child than I will. I’ll be nothing, and it’ll be alive.”
Introduction
Paths of Glory in a double-bill with Dr Strangelove would be incredible. Whilst one deals with the politics of the Cold War and the atomic bomb, Paths of Glory deals with the complete injustice and unfair accountability of soldiers during war time. These two films, alongside Full Metal Jacket, clearly establish Stanley Kubrick’s anti-war stance. Kubrick has said the following about politics – “The great nations have always acted like gangsters, and the small nations like prostitutes” and the muddy, messy nature of the fights depicted in Paths of Glory do not depict the ‘Glory’ of battle, but the horror. It is no surprise that Spielberg has noted how Paths of Glory is one of his favourite Kubrick films – and you can see the influence it has on Saving Private Ryan and, more recently, War Horse. Both War Horse and Paths of Glory are set during World War I and while War Horse plays down the injustice – clearly depicting the English as “Heroes” whilst the Germans are “Villains” – Paths of Glory portrays the French against the Germans and boths sides are as despicable as the other. Now that I mention it, the enemy of the German opposition is never seen!

Patriotism
Colonel Dax (Kirk Douglas) quotes Samuel Johnson early in the film to his superior General Mireau (George Macready) – “Patriotism…is the last refuge of a scoundrel”. Mireau is the scoundrel and his simplification about an attack on the Ant Hill – comfortably noting how “25%” of soldiers will die during the first wave of the attack – highlight this from the start. What begins as an attack crossing no-mans land in the first act changes dramatically after the plan fails as a whole regiment refuses to leave the trenches. It is clear that the soldiers would not survive if they got past the wire. General Mireau argues that the soldiers who did not leave the trenches (and the soldiers who retreated) showed “cowardice in the face of the enemy” and should be shot. Mireau believes that if the soldiers followed their commands they could have taken the Ant Hill whilst Colonel Dax believes that it was a completely flawed plan from the outset and it would be suicide for the soldiers if they followed the order. Mireau counter-argues that if that would have been the case, so be it. The soldiers should have followed the order. Three soldiers are chosen and placed on trial to set an example. 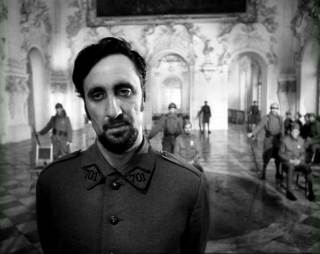 This is a fascinating conflict to discuss. In war, it is expected that all soldiers follow every order they are given. Even if the order is suicide. General Mireau, a man in a position of power, is responsible for the death of many men and this strikes a direct parrallel with General Jack Ripper (Sterling Hayden) in Dr Strangelove – as he attempts to start a nuclear war. Unlike Ripper, Mireau is not portrayed as a mad man – he is not locked away in a room pushing buttons. Mireau is a senior officer who defends his case and argues his views successfully – his superior General George Boulard (Adolphe Menjou) respects him. Boulard and Mireau are cut from the same cloth and understand the expectations of the senior ranks – whilst they both see how expendable the soldiers on the front line are. Colonel Dax on the other hand is between the two – he fights alongside the soldiers on the battle field and also takes orders and discusses strategies with the Generals. This perfect place in the ranks of the army is what makes him such a fascinating character; uncorrupted by the upper ranks and understanding enough to respect the soldiers and their duty to society. To top if off, he is a lawyer outside of the war and clearly understands the word justice. 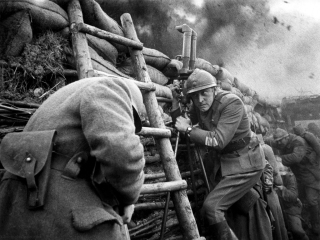 Technical Skill
The way Kubrick shoots the trenches is incredibly atmospheric. The camera seems to be squeezed amongst the men and walks through the long, narrow gutters. You cannot help but consider the awful conditions these men were kept within. So many men are seen as Colonel Dax is walking through these trenches, we know that he is thinking the same: These are not merely pawns in a game of chess – these are men with wives and families. Ironically, it is General Mireau who asks the men about their families – “Do you have a wife?” and stating how “Your Mother would be proud”. These are empty comments and when he approaches a man who is shell-shocked this pseudo-kindness changes as he calls him a coward and immediately removes him from his post arguing that his fearful attitude will “spread” amongst the men.

Furthermore, the use of lighting by cinematographer Georg Krause is haunting and moody. Especially within the sequences whereby the three accused are in prison. As the priest offers to give the soldiers their last rites, the lighting is sparse and creates a religious and classical atmosphere. Contrasting these sequences with the expansive and affluent mansions and dance-halls shows how divided the soldiers and their superiors are. General Boulard is never on the battlefield and even Mireau who is on site, is clearly at a safe distance. The soldiers on the other hand are only seen in small, cramp trenches, bars and cells. This only changes when the three men are on trial themselves. Hinting at the only access to these places is through illegal and corrupt acts.,
Relevant Today
It finishes as Colonel Dax is offered a promotion – his effort in supporting the soldiers and making Boulard aware of Mireau’s actions to kill all Paths of Glory clearly establishes a context that highlights the ugliness in war and the injustice in the actions expected of others. Unlike reality, in Paths of Glory, Colonel Dax leaves the room without the promotion having made his stand –

General Broulard: Colonel Dax, you’re a disappointment to me. You’ve spoiled the keenness of your mind by wallowing in sentimentality. You really did want to save those men, and you were not angling for Mireau’s command. You are an idealist… and I pity you as I would the village idiot. We’re fighting a war, Dax, a war that we’ve got to win. Those men didn’t fight, so they were shot. You bring charges against General Mireau, so I insist that he answer them. Wherein have I done wrong?
Colonel Dax: Because you don’t know the answer to that question. I pity you.

Dax leaves the room and watches the soldiers in a bar, blissfully ignorant, watching a German singer – for a moment – whisk the men away from the horrors of war. Horrors they should not see.