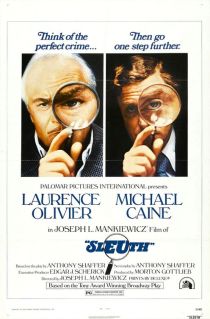 “So I understand you wish to marry my wife.”

When I think about incredible scriptwriters,the first three names which come to mind are: Aaron Sorkin, David Mamet and whoever wrote the screenplay for His Girl Friday (Ben Hecht wrote the play “The Front Page”, which it is based upon, whilst Charles Lederer is credited for the screenplay itself). I feel I may be adding a fourth to the list, noting the words written by Antony Shaffer. If you love the speed and perfect dialogue written in films like The Social Network, Glengarry Glen Ross and His Girl Friday then the next film to hunt down is Sleuth.

From the English Country Manor to Dr No’s Lair

When you consider Ken Adams set-design in the 60’s James Bond films, it is easy to automatically think about the excessive volcano-base in You Only Live Twice and the interrogation room Professer dent speaks within in Dr No. But Ken Adam’s stunning sets were not limited to these expansive, iconic designs. He also designed the office for M and the living quarters of Dr No – including the infamous Duke of Wellington portrait by Goya. It is the latter designs that became the style Ken Adams worked within on Sleuth working alongside Peter Lamont supporting as Art Director (Lamont would move on to become Production designer himself on films including Titanic and Casino Royale).

As an adaptation of a two-man stage-play, the set becomes intrinsic to the story. We are forced to acknowledge the obsession of “game-playing” Andrew Wykes (Olivier) through the small set-pieces he keeps within his basement and the multiple automaton’s set-up across the lounge – even his precise Kitchen etiquette and archaic taste in music (Cole Porter) reeks of a character who is false and forced to play a role in life. Until this month, it would’ve been a stretch to know what an automaton is – and now, through Sleuth and Scorsese’s Hugo, I now have a very clear idea of what these robot-puppets are and how they predated cinema. Another visual signifier of Wyke’s fake-persona and almost-robotic – and definitely outdated – political attitude.

A Fight to the Death

On the surface, we see Andrew Wykes attempting to commit insurance-fraud using Milo Tindle (Michael Caine) as his pawn due to Tindle’s affair with Wyke’s wife Marguerite. But this two-man show constantly shifts and changes the perspectives. We constantly question who is in a postion of power and who is not. Initially, it seems that Wyke’s has Tindle in the palm of his hand – going so far to dress Tindle up in a clown outfit and reducing a man who has broken free from the working class roots his father came from, back to becoming a petty theif. This constant parrallels as Caine represents the younger, impulsive generation as Wyke’s represent the older, outdated, traditional older man. The fact that both characters portray different types of men – even hinting at how Wykes is perfect for Marguerite because he can “afford” her, whilst Tindle is perfect for her in a sexual need. Wyke’s is happy to tell us that he “could copulate for England at any distance” but Wyke’s observation of Tindle as he changes into the clown outfit seems a little more than a passing interest … and we also find that he hasn’t “copulated” with his own mistress Tea in years…

It is the English versus the second-generation immigrant as Tindle is clear about his Italian ancestry, something that Wykes resents. Upper Class versus Working Class as Tindle works in a London Hairdressers whilst Wykes writes books isolated from society in his country manner. Fact versus Fiction as Wykes is an author of detective novels and this constantly informs out characters as to what “would” and “wouldn’t” happen in a detective story – we are constantly unsure who to trust, even if we know the secret about Inspector Doppel, we are still tense as we do not know the truth about the previous situation. 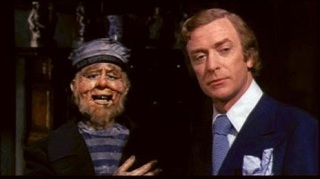 I Saw This Before …

A two-man theatre-adaptation from the early 1970’s starring Lawrence Olivier and Michael Caine is unlikely to connect to the Saw franchise … but indeed, it does. Sleuth is crucially built on the foundations on game-playing, high-stakes game-playing that highlights inequality in an upper-class world. Like Jigsaw, Andrew Wykes constantly talks in riddles, quotes and accents. The entire subtext revolves around how life “is a game” and, the set-ups, plans and ideas are for our benefit and we, as an audience, are completely kept in the dark about what will happen next. The three-act structure is clearly defined as the first act portrays a power-play duality between the two characters (trying very hard not to give anything away), whilst this flips – in terms of who has the power – during the second act. The third act, raises the stakes and we are all on the edge of our seats waiting to see how it will pan out. In fact, I wouldn’t be suprised if the remake of Sleuth starring Michael Caine (playing Oliviers role) and Jude Law may have been green-lit due to the current appetite for ‘game-playing’ that audiences had. I know the tricks Jigsaw pulled and the games were the reason I enjoyed the Saw franchise. I doubt Leigh Whannell and James Wan watched Sleuth at any point prior to making the Saw, but if they had they would realise that their game-playing concept was nothing new – and dated right back to the 70’s. I mean, there is even a puppet who has a recurring role and a creepy laugh!

My closing paragraph highlights the themes of image as throughout the film, we see close-up shots of the automatons and their faces looking down on Wykes and Tindle. The idea of image is a recurring theme – Wykes lives by a code and Tindle has changed his persona to suit the higher-class of life he is living. He intially stops-short and corrects his working-class colloquialism to speak to Wykes, whilst Wykes puts on accents and even mocks Tindles heritage by offering the job in a comedic Italian-gangster accent. Bitterly ironic that The Godfather of the same year re-established the Italian-gangster crime story so that it became organised and upper-class – opposed to Wykes perspective that it only solidifies Tindles working-class roots. More upsetting is how both Michael Caine and Lawrence Olivier were nominated for Best Actor in a Leading Role, whilst losing out to Marlon Brando’s Don Corleone.

At any rate, I obviously recommend this film very highly if you haven’t seen it and I have tried very hard to keep the many secrets of the film hidden so you can enjoy the film as I did. One thing which is clear though, is the reality of these games. Though a game – and percieved as such – this is a game that has real implications. The separation between these two men and between the areas of society they represent is very real. We can wax lyrical about the meanings and we can talk often about the news and how they depict society – but it is real and it can be the difference between life and death. Those who fail to acknowledge this are clearly under the assumption that poverty is almost a game unto itself and as long as you are “winning” then you don’t need to worry.