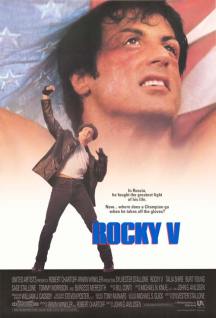 “Natures smarter than people think”
Introduction
This film was clearly supposed to be the end of the Rocky film series. Stallone was initially keen to continue the story in Russia and continue the dichotomy between Drago and Rocky, but for no clear reason, this idea was scrapped. Instead, the film – like all the films – continues where the previous film left off starting a whole new drama. Rocky has returned from Russia – he is shaking, his memory is fading. As the press ask him questions on his return, a passionate businessman proprositions him in the middle of the junket setting him up for a future fight. Rocky turns it down…
Getting Back To His Roots
It is clear that now Rocky has effectively conquered the world, the next step is to take him back to his roots. He has to lose everything: his health, his money and, towards the last act, he nearly loses his family. Though we have briefly revisited Philadelphia in the previous two films, it is Rocky V whereby he goes back to Philadelphia for the duration. Unlike Rocky and Rocky II, this is not where he wants to be – and crucially not where he wants Adrian to be. These historical facets to Rocky V are only possible because of what we know about. It is fair to say that Rocky V can be watched without any prior knowledge – but the deeper connection to Philadelphia, the passing of Mickey and the poverty that Rocky has worked his way out from ensure that this film is a much more fascinating film, given the past we have seen.

The Birth of a Champion
I think that all the previous films build Rocky up from a point in his life whereby he could’ve easily sat back and let the world pass him by. There was a history before the first film, whereby Rocky was a street-fighter and trained to be a champion under Mickey, but settled to be a ‘bum’ collecting money for a “two-bit gangster“. The first film sets him up as he is given a chance to reclaim what should be his – and the rest is history. If Rocky V was made today, I wouldn’t be suprised if it would be a prequel: Rocky Begins, Rocky Origins or Rocky: The Beginning. The film constantly relates to his past – the training Mickey gave him, his own Son facing the challenges in school and understanding that sometimes, “fighting is neccessary” (despite disliking violence), the training of Tommy Gun and – most importantly – his whole ‘birth’ in street-fighting.

The Boxing Business
Connecting to the ‘roots’ of Rocky is additionally his detachment from the boxing ‘industry’. Rocky always had Mickey as his agent and trainer. Rocky tells Tommy Gun:

“This is what Mick told me about. About the business, the dirty part of the business. These managers, when they represent these fighters, they promise them the world, then they, they suck’ em dry, leave them, leave them in the gutter, broke Tommy”

This is a fascinating development of the franchise. The whole idea of Rocky as a product has been explored before, but the importance of money versus the necessity of money. We know that Rocky had it all and, through greed of his accountant, he lost it all. Rocky trains Tommy Gunn up from his roots, taking him way back to his own beginnings in an incredible scene directly lifted from the first scene in Rocky, whereby Rocky took on Spider-Rico, now Tommy is fighting. It is easy to think that Rocky is desperate to relive his own past glories – and to some extent he is – but by breaking Tommy down to the same place Rocky came from, we can see how what Tommy doesn’t have is the same heart. As cliche as that may be, it comes back to the belief in oneself – a respectable, honourable and dignified belief. Only through seeing these relevant connections to his past do we appreciate how, even before he started his training to fight Apollo Creed, Rocky was respected, honourable and dignified. These traits are what made him who he is. 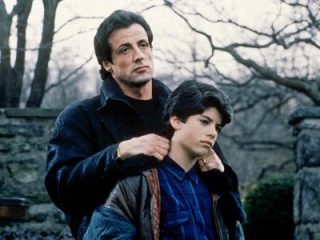 Upper Class to Working Class
In parrallel to Rocky’s story, we also have Stallone’s son playing Rocky Jnr. Rather than coping with the change from poverty to wealth, and back to poverty again – Rocky Jnr has moved from wealth to poverty. Through no fault of his own, his entire attitude has to change – he is the new ‘posh’ boy in an alien school. Rocky tries to encourage him, but it is a long road ahead for Rocky Jnr. His understanding of fighting changes as, initially, he is reluctant to get involved, but he eventually understands that some people will only respect you through your own self-defence. Is this a comment on fighting itself – or the neccessity of this trait within urban poverty. I think this film surely shows how skilled Stallone is in writing a drama whereby the three characters constantly weave in and out of each others storylines, with tensions between all three: Rocky and Rocky Jnr establishing a relationship, the envy Rocky Jnr feels towards Tommy Gunn, Tommy Gunn’s respect for Rocky – whilst fully exploiting Rocky’s need for a fighter-son. A fascinating trichotomy (I looked it up, it’s a word for “man having a three-fold nature”).

Incomplete Finale
With so many strong parts of the story, it is a real shame that the end seems to fall a little flat. Rather that finishing in the ring, with Rocky taking on Tommy Gunn … he fights in the streets of Philly. Everyone chants and cheers around the two, with one-liners thrown around flippantly – “Yo, Tommy! I didn’t hear no bell…” – whilst the fight becomes much more physical, as Stallone rugby-tackles Tommy and the two use whatever items they find lying around to hit each other. It’s poetic that, at this stage in the franchise what was the final fight, was going to be on the streets marking the territory that Rocky hails from. But it is also not the finale we are expecting to see – the lights, the ropes, the back-to-back punches and strategies employed – and commentated on – as the fights often went to 15-rounds. Where are the huge bombastic displays? I completely understand the reason why – considering how epic the fight in Russia was, it makes complete sense to go as small-scale as possible. In fact, how much smaller-scale could it get? Rocky beating his son up in the bedroom?
In 1990, this very much felt like the end – but I wouldn’t be suprised if after multiple viewings of the film, Stallone knew the finale should be in the ring. But it took a long time to make it happen. It seems that Mickey was right: “Natures smarter than people think”