“Except for my kid bein’ born, this is the greatest night in the history of my life.”

I complained about Rocky, and how (as a boxing-movie) it only had two fights in it. Rocky II has two fights in it … but the first fight is the one we’ve already seen at the end of Rocky! Indeed, Rocky II is more an example of the difficulties of setting up a family, topped off with a fight. I did not initially plan on writing about every film in the series – and I was worried that the second film would be such a dismal sequel that there would be very little to discuss any way. I am happy to say that, so far, there is something interesting to write about and, indeed, some significant issues the sequel raises.

The Follow-Up to an Oscar Winner

Very few Oscar Best Picture winners spawn sequels – The Godfather Part II is the only one that comes to mind when I scan through the list of winners. Rocky is the other. And indeed, it was worth it, becoming the 3rd highest grossing film of ’79 behind Kramer VS Kramer and Moonraker. In fact, it was the highest grossing sequel until The Empire Strikes Back. It received generally positive reviews and it is worth noting at this point that Stallone not only wrote the script but additionally directed the film.

Indeed the directing is top-rate. Unlike Avildsen, Stallone became more expressive in his use of camera and editing. The editing in the final fight slows to show the real impact of each punch whilst the decision for the film to follow directly after the fight in Rocky ensured that the film didn’t leave people in the dark about the end of the previous film – so you know, Rocky lost the fight at the end of the film. Crucially, Rocky ends as Creed tells him “there ain’t gonna be a rematch” and Rocky replying that he “doesn’t want one”. This is directly changed at the start as Creed asks Rocky for a rematch “Any time, any where!” – Rocky is confused, Creed is displaying an image of himself, but Rocky sticks to his guns and decides to retire from boxing. This is fascinating – despite the advertising campaign clearly depicting Rocky back in the ring and stepping up to re-fight Creed, the entire film is about how Rocky tries not to do this. In fact, a whole plot is based on the fact that Rocky has damaged his eye and “could go blind” if he takes another beating. A slight structural issue resides when Adrian tells him to “win”; suddenly this blindness threat is no more … and the state of Rocky at the end of the final fight really looks like he will have difficulty with his sight in the future. I’ve yet to see Rocky III so who knows if this will be addressed in that film. 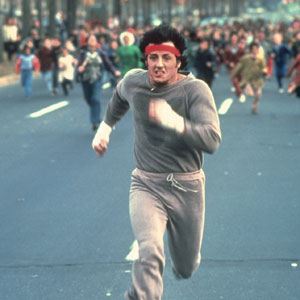 The film attempts to explore multiple themes, but fails to clearly stick to one. In the first instance we observe Rocky going right back to his roots and trying to earn honest money. He works at the meat-factory (in an interesting switch of roles with his Adrian’s brother Paulie) and refuses to go back to his criminal job with Gazzo. The confusion I feel is the progression of the story – Rocky spends his money on cars, clothes, watches and buying a new house but then has to sell his car because he cannot hold down a job. It is almost as if we are supposed to pity him, rather than support him whole-heartily. Maybe it is attempting to highlight short-term success – and how he should’ve though about the future, rather than spending the money so quick. Indeed, poor Adrian (Talia Shire) has to go back to work in the pet shop.

Our lack of support continue as Adrian’s health is even affected by Rocky’s apparent selfishness. I have a feeling that it is a simple case of how both Adrian and Rocky’s initial actions following his success were short-term and not thought-through. The consequences were inevitable. The depiction of the working-man and the struggles seem to be at odds with themes laid out in the first film. Especially as their relationship is so beautiful – subtle glances that show such a tender relationship.

One single scene raises an acute awareness of image. Apollo Creed has had his image destroyed after the fight in the first film and his marketing agent tells him that, if he insults Rocky in the press, then he will appear as the “bad guy”, implying that clearly he is not. There is a business man in Creed – the fight may have physically shown a weakness, but his image and reputation as a sports star is affected and that does affect business. He was aware of this when he retracted his comment about how “there ain’t gonna be a rematch”, when his image dictates that there is.

Rocky on the other hand does not concern himself with image – he is honest. So much so, that he will reveal his to-do list at a press-conference. His image represents who he is and, through that, he gains support. The loyalty Mickey has for him, is because of how honest Rocky is. He is not trying to just be the ‘tough guy’ – the fight means more to him than that. Rocky is a born fighter and it is what he is destined to do. An interesting scene as Rocky speaks to Adrian, he tells her: “I never asked you to stop being a woman, don’t ask me to stop being a man”. This is who he is and as a Father, he cannot lie to his Son. He is boxer who is a southpaw from Philly – not a cleaner at Mighty Mickey’s.

The support of his friends and – in the training against the backdrop of Philadelphia – the children of America, Rocky wins. True support and love from his family and friends. Apollo has a media-created identity and a fanbase that writes letters to tell him how one negligible-win is simply ‘not good enough’.

Rocky II also clarifies Rocky as a Catholic. I guess his Italian roots are highlighted from the outset, but the fact that Rocky wears a crucifix throughout the film – often dangling into the centre of the frame – indicates a regular nod to God himself (even recalling the young Italian Father Karras in The Exorcist)- . Rocky asks for a blessing from his priest prior to the match and he thanks God following the match. Maybe there is a little more meaning in the idea about guilt – the guilt Rocky feels for letting Adrian down, and not supporting her better when she was pregnant may be the driving force behind his success. The idea that the guilt combined with love is a balance that ensures you live a good, Catholic, life? Maybe we are all attaining to reach the higher realms and ‘beat’ life, making it to Heaven? People can go through life living a lie (working in a meat-factory) or even ‘doing our part’ by going to Mass every week (Rocky working at the gym) but what we need to do is actually get in the ring and challenge our life, and be honest about our faith. We should face the challenge of faith and actually attempt to be Christ-like. Maybe.

I can appreciate the frustration people have in the angle it approached the story but I still rate Rocky II as a good follow-up. The Rocky franchise seems to challenge expectations rather than simply deliver the same story again – or merely ‘up-the-ante’ with multiple fights. It makes the film much more profound and crucially, the final fight is much more engaging and involving. In fact, I didn’t know the outcome of the final fight and I was cheering him on throughout. And isn’t that the point?