“Stay in school and use your brain. Be a doctor, be a lawyer, carry a leather briefcase. Forget about sports as a profession. Sports make ya grunt and smell. See, be a thinker, not a stinker.”
Introduction
I often read the ideas titled ‘How to make your blog better’. They always say “make sure you update on a regular basis”, etc. I think of Rachel at Rachels Reel Reviews and her daily focus points, then there is A Life in Equinox with, amongst other regular features, he has ‘The Monday Corner’ every Monday. I should have something like that put in place but I know I would get behind. One thing I enjoy writing is Art Gallery reviews – but they take up a lot of time and, though they bring up great parallels with cinema, I think the fact that it is modern art, people are probably put off from the outset. I have recently purchased the Rocky Blu-Ray box set. This first film is truly brilliant – and even watching it in the Film Club at my school, many boys thoroughly enjoyed it. But it is more, much more, than a boxing film …

A Second Watch, A Second Fight – and its over

One thing I noticed in this second viewing is how little Rocky actually fights. Rocky is renowned for the fights – the constant barrage of sequels are a testament to that. But, this Oscar-winning film only contains two of them – one at the start and one at the end. That’s it. The first one – Spider Rico VS Rocky – is how the film opens. It shows us the dirty nature of the fights Rocky is involved in. He has to pay for the privilege to fight in the first place – being charged for use of locker, etc. He loves the fight, but he has paid a high price to be able to live such a life. He works as a collector for, what appears to be, the Mafia. This, as Mickey (Burgess Meredith) attests, is what stopped him from making it big. But Apollo Creed (Carl Weathers) is desperate to fight a rookie, a novice. Apollo Creed wants to give a chance to an American – but then win the fight (is that knocking him back down again?) as some sort of advertising campaign.

Fact is, even the Apollo Creed narrative is not fully introduced for at least 45 minutes – taking time to structure the relationship Rocky has with Adrian (Talia Shire), her brother Paulie, the gym he works out at, his job as a collector – even spending time establishing his home life with his turtles. For a film that reeks of masculinity – it spends more time on the feminine aspects of a man: home life, love and friendship (okay, maybe these are unisex, opposed to exclusively feminine). The animalistic attributes of a man – dominance, anger, physical aggression – are quite clearly set-up as more animalistic than masculine. We are supposed to feel intimidated as Rocky attempts to charm Adrian, we are supposed to feel upset for Rocky as he loses it when Mickey offers to manage him. To top it off, his physical aggression in boxing, is not determined by winning, it is by standing, for 15 rounds against a stronger fighter. The second and last fight of the film.

What does Life expect?

I often listen to commentary tracks for a film, seconds after the film has finished. While I potter around and clear-up the debris, I’ll listen to a commentary on the final ten to fifteen minutes of a film. Stallone himself completed a commentary for the film and in those final fifteen-minutes he explains how the film is an allegory of life: Rocky doesn’t win the fight. I think in all the commotion, its easy to get a little confused and just assume that the positive energy and uplifting score of Bill Conti implies he has won. Rocky didn’t win. Apollo Creed won. Fact of the matter is, Rocky didn’t lose either. As I understand, it is – in layman terms – a draw. Rocky stood there for fifteen rounds so, as Stallone says on the commentary, you can see its not the punch you give that counts, its the punches you take. The self-belief Rocky has is more powerful than Apollo’s win – Apollo is someone who prides himself on winning, arguing “there ain’t gonna be a rematch”, but Rocky replies “don’t want one”. For Rocky, it doesn’t matter, he doesn’t want to destroy Apollo Creed – he looks up to him – he has his own personal goal. And that’s what counts. 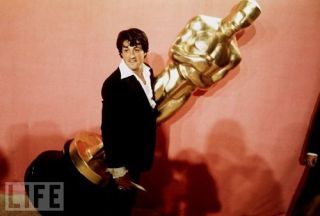 There is so much more to Rocky than fights – the envy Adrian’s brother has over Rocky. The slow and steady build of a relationship between Adrian and Rocky and even the complex, and upsetting, history between Rocky and Mickey. The best sequences are not the boxing matches. I would be happy to defend specific scenes as Rocky calls out over Mickey asking why he wasn’t there for him and the subtlety in the date between Adrian and Rocky. I would even argue that Talia Shire’s performance in this movie is better than in all three Godfathers put together.

Then there is the incredible score by Bill Conti. The parade-like theme that forces you to root for Rocky throughout – even the choice of using brass primarily was bold. Something that would haunt Conti for the future (Just hunt down his score for For Your Eyes Only and listen to the track ‘Runaway’…). There are already many books based on this one film and, off the top of my head, it is worth noting the subtext in the story about what it means to be an American. The very definition of the American dream – the working man clawing his way to the top.
To finish, Rocky is an incredible movie inspiring countless imitators – it ultimately gave Scorsese the opportunity to release Raging Bull (though completely different, ‘the boxing movie’ had been a little unpopular pre-Rocky). Balboa trains by smashing the ribs of meat – and this becomes what makes him an incredible boxer – the ribs. This is how we finish, how the true majesty of this film is about what’s on the inside – much like the ribs. It is not the butch physical-force that many believe is what makes a man, it is what is in your heart that makes you successful.
*One little fact I found interesting but couldn’t fit in – the nose represents a ‘badge of honour’ and, when it is bust in the fight, it is this honour Rocky parts with showing that he can take this and will continue to fight…

This post was originally written on 7th June 2010, but I have updated it for this re-release…