A Matter of Life and Death (Michael Powell/Emeric Pressburger, 1946)

“One is starved for Technicolor up there”

Introduction
In 2004, Total Film magazine called on 25 critics to decide on the Top 50 British Films ever. From Russia with Love, came in at No.9, Trainspotting hitting the No.4 spot whilst The Third Man sat at the No.3 spot. A Matter of Life and Death sat pretty at No.2 whilst Get Carter nabbed the No.1 position. It was initially a propaganda film trying to smooth relations between England and America following the second World War. It does indeed do this, but becomes so much more than that …

Called Stairway to Heaven in America, A Matter of Life and Death is a film created by the hugely-influential filmmakers Michael Powell and Emeric Pressburger. The duo are often considered to be directors who were ahead of their time and when you consider how A Matter of Life and Death discusses the profound and fascinating idea of life-after-death within the context of World War II, you can see how. This was not your usual romantic-drama, this was a film that equally argues its case for life-after-death and atheism as our lead character, Peter (David Niven) appears to have skipped death and is consequently put on trial by the court of Heaven. Whilst, on Earth, we are told he is hallucinating. 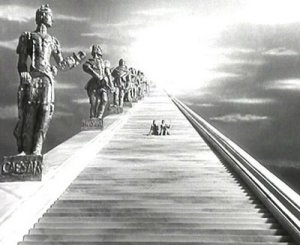 To show such a concept, it required large, dynamic film-sets to present the court and stairway to heaven itself. These few sequences became iconic themselves as imitations feature in the music video for the Pet Shop Boys Go West single whilst another set-up appears on the sleeve for Phil Collin’s single Something Happened on the Way To Heaven. Not to mention how Conductor 71 has an interest in chess and games – a staple of the character of Death in both The Seventh Seal and Bill and Ted’s Bogus Journey.

Jack Cardiff discusses on a Special Feature on the DVD for A Matter of Life and Death: “I had worked in black-and-white, of course, before colour came in but by the time I was old enough, or whatever, to become a cameraman, technicolour had arrived, so my first photographic job was in fact in colour – and it was called A Matter of Life and Death”. Jack Cardiff’s “big break” was due to Michael Powell and as a challenge, the use of colour in A Matter of Life and Death was intrinsic to to the story as Heaven was shot in black-and-white whilst Earth is shot in colour – according to Michael Powell this was because it is what the audience didn’t expect. Like a reversed version of The Wizard of Oz, it seem to even give a nod to Victor Fleming’s 1939 classic by even doubling-up characters in Heaven and on Earth as the Judge in Heaven doubles-up as the doctor who is operating on Peter. D.O.P. Jack Cardiff went on to become Director of Photography on The Red Shoes, Rambo First Blood: Part II and The African Queen.
Controversial Talking Point

The film initially opens on text that reads: “This is the story of two worlds, the one we know and another which exists only in the mind…”. Suddenly, it scrolls up to continue the statement: “…of a young airman whose life and imagination have been violently shaped by war.”

The very nature of creating a film about life-after-death and the judgement of God and starting a film noting how it only “exists in the mind” is incredibly brave. More fascinating is how the film continues to keep this theme throughout the film. Peter has survived jumping from an airplane without a parachute and you either see that as luck or you see it as a miracle … and his ‘dreams’ and ‘hallucinations’ are either angels or figments of his mind. A specific line goes further to establish the context as everything he recalls from his dreams and hallucinations is from his memory, stating “nothing is fantastic”.

At one point, the camera is sat from the perspective of Peter lying on a stetcher moving into the hospital ward. Clearly, Brian De Palma’s opening – and finale -to Carlito’s Way is inspired by this very sequence. The huge stage-sets at Denham Studios, created by Alfred Junge, must have inspired Ken Adams and his Pinewood Studio James Bond sets. Even the start of the film as we see June speaking to Peter as the Lancaster is about to crash down, in the WW2 context, must have inspired those final moments in Captain America: The First Avenger. Seriously – watch the two together, Joe Johnston must have known what he was doing – just compare Kim Hunter to Hayley Atwell. Then we have the ambiguity around the context – are we watching a man fight the madness that has corrupted his mind following war … or are we watching a Final Destination guy-who-has-cheated-death scenario. Clearly, noting all those inspirations show how much ahead of their time Powell and Pressburger truly were – and how important this film truly is.