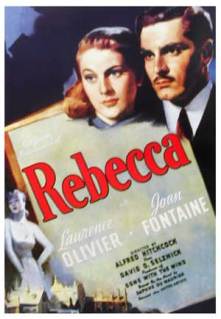 “I say, marriage with Max is not exactly a bed of roses, is it?”

Hitchcock’s Rebecca rarely features in boxsets. It doesn’t feature in the set which includes The Birds, Psycho and Vertigo (as I understand, his ‘Universal’ films), whilst it additionall does not feature in the box with North by Northwest, Strangers on a Train and I, Confess. Additionally, it is not as early to feature in the ‘Early Hitchcock’ collection (Blackmail, The Ring) and, as it was made in America, it is obsiously not in the ‘British Hitchcock’ collection (The 39 Steps and The Lady Vanishes). Much like To Catch a Theif, this film sits independently. So, funnily enough, having watched many Hitchcock films, this is the most recent one I have viewed, and it is indded quite telling how big an influence Hitchcock is…

Citizen Kane – you have some explaining to do!

As soon as I popped this film in, it opens with a slow zoom-in to some gates – and then through the gates to settle onto Manderlay. Manderlay is a huge, imposing building that – we hear through narration – “Manderley– secretive and silent/ Time could not mar the perfect

symmetry of those walls”

It is a dreamlike world this ‘Manderlay’. In these opening minutes, I was amazed: “This is hugely influenced by Citizen Kane!” I thought. Even the iconic zoom-in, the dreamlike Manderlay replacing Kane’s Xanadu. All we need is the ‘No Trespassers’ sign and it is virtually the same opening. Suffice to say, Citizen Kane was released one-year later and Hitchcock’s Rebecca preceded Orson Welle’s classic film.

The actual story itself is completely different as a nameless woman (Joan Fontaine) falls for an exceptionally affluent and mysterious man: Maxim De Winter (Lawrence Olivier). She first meets him as he appears to be considering suicide and, the film unravels, as the two marry and Fontaine has to take the place as Maxim’s second wife. When they return to his mansion – Manderlay – the servants and maids appear to be resentful towards Fontaine. Especially Mrs Danvers (Judith Anderson) who clearly became obsessed with Maxim’s first wife – Rebecca is her name.

Throughout the film, there is a sinister undercurrent of fear as we do not know how the story will roll out. We do not know which perspective the film is truly siding with – is Mrs Danvers a threat? Is Fontaine losing her mind? Is Maxim hiding something? The film is split categorically into three acts. The first act capturing the fast-romance between Fontaine and Maxim De Winters, the second act showing the challenge Fonatine has to take the role of ‘the new’ Mrs De Winter. Then the final act, reveals multiple truths about ‘the old’ Mrs De Winter and Maxim himself. It truly is a great film, so I shall shy away from spoiling the film.
Critical Success for Mr Hitchcock and Selznick

The 1940 Academy Awards praised this film with 11 nominations – notably for Joan Fontaine, Lawrence Olivier, Judith Anderson and Hitchcock himself for Best Director. Considering the previous year, 1939, is renowned for being the best year in film history (Gone with the Wind, Wizard of Oz, Mr Smith Goes to Washington, Stagecoach  – and they were only a few of the Best Picture nominees!), 1940 was pretty strong too – with Hitchcock going up against George Cukor and The Philadelphia Story and John Ford for The Grapes of Wrath – and losing to Ford ultimately. Rebecca did win for Best Picture though whilst George Barnes took home the statuette for Best Cinematography. A tough year – and I think, though Hitchcock didn’t win an Oscar at any point in his career, this was the closest he got and, without having seen The Grapes of Wrath, I have a feeling that there is an argument for Ford’s winning.

If I was to summarise the film into a Maths equation I would use Gone with the Wind and mix it in a pot with Citizen Kane and you would come out with Rebecca. Considering Gone with the Wind won the previous year, it strikes me as a telling notion of cinema at the time as these two films won the awards back-to-back.

To Finish…
This is the first Hitchcock American film – and it comes across as very un-American and un-Hitchcock. No Jimmy Stewart or Cary Grant, instead we have the true British Thespian Lawrence Olivier. No quirky elements or fantastical tales – this is played straight and very serious. Indeed, a true murder has occured – or has it, even that is unclear! It shows Hitchcock playing with the audience – and playing with the ambiguity of each character: Who is loopy? Mrs Danvers the housemaid clearly is a little bit too obsessed … is the new Ms De Winter simply not settling into this affluent lifestyle or, even, are they even truly in love?

I have recently been reading the highly acclaimed interview between Truffaut and Hitchcock and, when discussing Rebecca, they note how the story is supposed to be dark and twisted fairytale – in fact, arguing most fairytales are dark so it is a Cinderella-like tale of Fontaine in a position whereby Mrs Danvers is a wicked step-sister. This is where I shall conclude my post, as this is Hitchcock’s only fairytale-like film. It marked the point, whereby Hitchcocks move to the US truly began – and his career spiralled ever-upwards, establishing him as the Master of Suspense.