‘The Clock’ by Christian Marclay 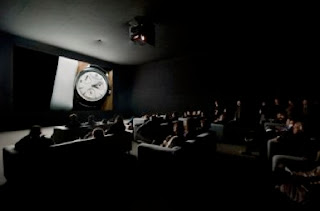 I have known long films. I have watched the 4-hours of Gone with the Wind. I have not endured the 5-hour edit of Carlos and have not sat through 9-hours of the acclaimed holocaust documentary Shoah but how about a film that lasts 24-hours? Any takers?

I have visited the Hayward Gallery on the Southbank and their current Art Exhibition is British Art Show 7: In The Days of the Comet. Amongst the artists featured are Charles Avery, Duncan Campbell, David Noonan and Phoebe Unwin. My attention was drawn to many pieces and their did seem to be an influx of video-installations – some of which seemed effective but, often, I find myself tiring easily after visiting too many of these dark rooms. The last one I visited by Christian Marclay was titled ‘The Clock’ and I was truly fascinated.
To describe is easy. It is a 24-hour art piece which, through multiple video-sources, shows the time. So, one piece of footage will show a clock used in Pulp Fiction before cutting to another section of film featured John Simm whereby the time continues and you see another clock showing the time again. The time continues throughout the day, for 24-hours. The difference being that the times within each chosen sequence is arranged chronologically.
To create this must have been exceptionally difficult. Not only does it show the time in a variety of sources, but it is also seamlessly edited together so that the music merges between sequences and themes continue. In the short section I observed between 4.15pm and 4.32pm at one point various sequences included horses from a range of films, whilst in another you could see how characters seemed to almost communicate through time – one character glancing round, only to cut away to another character – in a different film – appear to look right back. At the specified time – 4.15, 4.16, 4.17…
I find myself often having difficulty accepting video-installations in an art gallery. I often feel like it degrades cinema as pure entertainment, whilst these pieces are ‘actually’ art. Often, I believe, the lines blur. This piece is not to be viewed in a cinema. This piece is an example of how video-installations differ and that the video presents something that, though it is film, it is to awaken your senses to a different aspect to the medium. In this case adapting footage to a different intention – showing time and clocks tick by, across history, through multiple different people and situations. It is an impressive use of the material to be able to be adapted in such a way – organised in such a way. I managed to see the video pass through 4.30 and, I can imagine, as the time passes the half-hour and the hour, the situations become more heated simply due to their use of the time in the sequence – “for goddsake! I asked you to meet me at 4.30!”. It is unlikely for someone to specify the time to the minute. To imagine that every half-hour, the sequences become more intense, only to simmer down again before the next half hour ticks by, again, is a master stroke on the part of the editors of the film.
This is an art piece that any and every film lover needs to hunt down and, once you have seen it, hunt it down again, at a different time.

I found one video that explains it a little more, but unfortunately it is merely a guy with a phone-camera in front of a TV-screen. At any rate, it helps you understand the art-piece that little bit more…