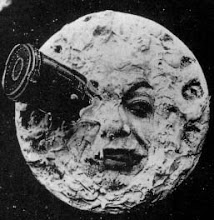 “Le Voyage …”
Introduction
Where fantastical film began – the idea that film transports you from one spot to another. A completely fictional universe, created by a filmmaker, for you the audience to step into for a short moment. The 1001 Film Club has returned with thanks to FilmSquish and TheAnswerMPV and they kick-off with freely available short – The Sci-Fi classic by Méliès. I cannot thank them enough as I am keen to ‘catch ’em all’ – much like Pokémon – one at a time and, as these freebies and shorts are easy ones to get, it is something I intend to watch as soon as possible. Though, I won’t lie, i’m not looking forward to the three-hours worth of Triumph of the Will and Birth of a Nation … one at a time I guess …

A better critic than I will be able to detail the exact influence this film has had on cinema but I shall merely mention the first films that came to my mind when I watched it. First and foremost, it seemed to remind me of Moulin Rouge. No big dance numbers here, no colour either – just a certain surrealist edge that is toyed with to support the strange french-edge the film posseses. The special effects used is subtle and eerir: a spaceship rammed into a moon – a moon that blinks with human eyes.

Thats not all either – the smoke-and-cut sequences as aliens leap around in acrobatic finesse only to be hit by a stick and, cut, the alien disappears. Reminds me of some films I made at Uni (Yes thats right, first is Georges Méliès then theres me…). The acrobatic forms that dance and move alongside the women, gymnastically poised on the planets give space and the moon an air of beauty that, without the feminine forms, would not be as picturesque.
Sets the Stage for the Future …
But the, what on earth could this be? It is the new medium of film  it is the beginning of cinema as a narrative. Cinematic-escapism in its primitive form and, through combining special effects and human skill steeped in an alien world – a world which had never been seen before brings another film to mind… could you say Le Voyage Dans La Lune is the Avatar of its day?
But unlike the special edition of Avatar, you can watch it – for free and legally – yourself! As a side note, it is interesting to note that Méliès intended to release the film in America and make millions, but Thomas Edison’s technicians nabbed it and copied it and sold it in America and made Edison millions … whilst Méliès got jack shit.

Who needs Avatar when you have this …

Remember – you can always email The Simon and Jo Film Show directly using this email: simonandjoshow@gmail.com