I noticed that the Barbican are showing a bunch of early Hitchcock films including showing Blackmail with a full orchestra! Here is a very early Hitchcock movie- its obviously black and white and silent. As I said before, this film was in a [not as popular] Hitchcock boxset and, as someone who wants to be clearly aware of the history of Hitchcock it is required watching. I won’t lie – for the casual film viewer these are quite clearly dated, but as a film viewer this is the type of thing which I love as it shows early ‘signs’ of Hitchcocks style and ideas that, to some extent, continued into his films in the future. I would like to think that as I watch more and more silent/early Hitchcock films I will draw more parrallels and come back to these posts but, currently, this is where we start and this is only my initial impression of Hitchcocks The Ring (alas, nothing to do with Gore Verbinski and Hideo Nakata)

It is merely a love-triangle story between ‘one-round’ Jack Sander (Brisson), his fiance Nelly played by Lilian Hall-Davis and Bob Corby (Hunter). Interestingly, the film begins at a fairground as we see Nelly on the ticket booth collecting the tickets before a fight begins, I think this is interesting because only seven years prior, the highy influential Das Cabinet of Caligari shows the sonambulist as a fairground attraction as a set-up. In a similar sense, we are teased for many minutes as we don’t know what is behind the curtain and we only know what is behind the curtain as a man is ‘egged-on ‘ by friends to go in … he emerges shortly afterwards bloodied. Already, we have a comedic touch with an element of mystery – consistent aspects of Hitchcocks films. 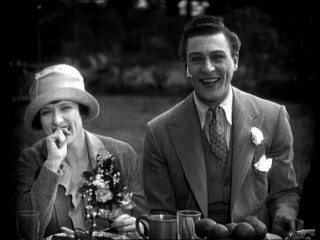 The finale of the film is, additionally, at The Royal Albert Hall. This feature, again, is a trademark of Hitchcock. As both The Man Who Knew Too Much films use The Royal Albert Hall as  the centre piece of the final act. I am positive that many more theatres feature in the directors canon, but suffice to say, a huge epic-scale finale goes without saying – Mount Rushmore in North by Northwest and Statue of Liberty in Saboteur, are two major set pieces that finish Hitchcocks films. This finale is an incredible sequence that utilises the entire scope of the hall.

The Ring also features a regular actor of Hitchcocks – no, Cary Grant and James Stewart does not feature but Clare Greet does. Greet featured in seven of Hitchcocks films beginning with The Ring and finishing with Jamaica Inn.

The title of ‘The Ring’ is highly appropriate as throughout the film we get many ‘reasons’ that determine the title – in the first instance we know that within the love-triangle is a professional boxer who Nelly falls for when he fights, in the ring. Additionally she wears a bracelet on her arm that symbolises this relationship and, finally, the marriage ring is clearly important as Jack and Nelly are engaged to be married at the start and Bob Corby is the Australian fighter who breaks them apart – and who Nelly runs away with prior to the final fight at The Royal Albert Hall.

Hitchcocks mastery of skill is shown throughout – from the epic scale of the Royal Albert Hall to the fuzzy and use of focus to show the dazed states(during boxing)/drunken perspective of the characters. It is fascinating to watch this purely for those unique little indications that led to the future of Hitchcocks career.